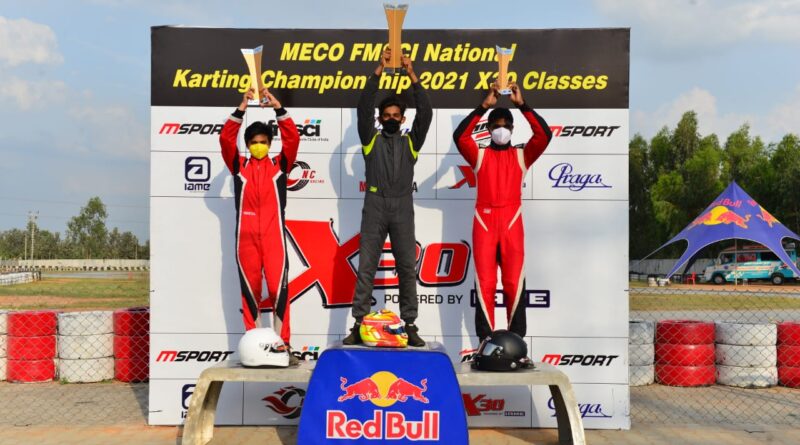 Ruhaan, Rohaan and Nikhilesh crowned champions of 2021
Bangalore, September 20: Bangalore racers swept all the three titles on offer in the Meco FMSCI National Karting Championship that drew to a thrilling finish here over the weekend.
Ruhaan Alva clinched the Senior title in the NC Racing MSport X30 India class in an emphatic manner while Rohaan Madesh (Junior) and Nikhilesh Raju (Cadet) had to battle it out to take the top spots on the podium

Boys from the Garden City picked up two more trophies, with Nigel Thomas taking the second place in Seniors and Zarah Misra the third in Cadets.

Fifteen year-old Ruhaan (167 points) was in a league of his own, impressing in each of the five rounds that were held under prescribed Covid-19 norms. He was invincible in Round 2, 3 and 4, claiming each of the four races that eventually proved to be the difference.

In the final round too, he suffered only one minor setback, taking the second position in the second race. But by then he had already sealed the championship.

Nigel Thomas (120) and Umashankar (92) rarely threatened him over the 2 months.
In the Juniors, Rohaan Madesh (146) had to ward off a stiff challenge from Jaden Pariat (134) and younger brother Ishaan 130.

Going into the final round with just a five-point lead, Rohaan came up with a stellar show, two wins and a second-placed finish to garner 32 crucial points. Jaden managed only 25 to settle for No. 2. Ishaan had the best day, scoring 34 points but it wasn’t enough to take him higher in the overall table.

The Cadet class was tantalising, with second-placed Arafath Sheikh (157) winning all the four races in the fifth and final round. But his 40 points could not dislodge Nikhilesh (167) from the pedestal. Nikhilesh’s consistent showing in every round held in good stead. 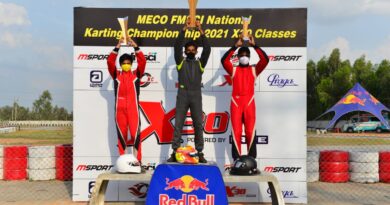