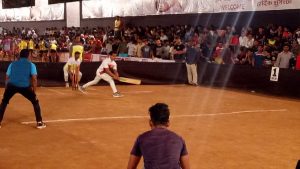 In era of 80s Mumbai streets and grounds used to be full of tennis ball cricket with atleast five to six matches being played on ground one fourth of Wankhede Stadium. The cricket was played with a tennis ball and popular brands were MRF, Practice, Proctice and so on. The tennis ball of ten rupees was as precious as gold for street players like us and even purchasing them was a ritual a enjoyable ritual.

There might have been about 1000 plus small cricket clubs in Mumbai practicing every day on every available ground with or without grass but dangerously perfect with pits and stones. The bodies and legs of players were tougher than those stones and muscles efficient enough to sustain unevenness of ground. Everything was as unorganized as a boys hostel room but as exciting as the enthusiasm of young boys and girls sitting in college canteen on broken chairs and having a cutting tea in a typical small glass.
Coming back to cricket, in seventies the matches used to be played between two teams (clubs) with 55 paise shield (winning team would get 55 paise (the five paise coin was as important as a fifty rupee note of today and was individually contributed by each of 11 members ) winning team would get a match ball (however dirty it may have become) as well. I can still put my money on the winning captain’s smile those days to be of more genuineness than a winning captain of an IPL team may be.
The tennis cricket was more popular in suburbs or southern parts of old city side may be among the middle class or rather lower middle class boys from a typical chawl culture. Only few areas like Shivaji Park and Cross Maidan were open for season ball (leather ball) cricket. The formal cricket was privilage of richer community in city side and higher middle class of Dadar area.
Slowly in late 70s, I think, the structured tournaments in tennis started to take root in suburbs of Mumbai and also in southern parts of city. At age of 12 I was just a spectator of these matches and tournaments among cricket clubs.
I remember matches used to be of two innings without over limit. After first innings of both teams there used to be lunch time. God knows what players used to eat (may be Vada Pav after its invention in Mumbai in late 80s ) but we as a kids used to run home finish roti subji in ten minutes (this was the only time we behaved like T-20 players not knowing what we were eating and why we were eating) and run back to ground to witness the match. Mind well most of the players were without chappals (leave alone shoes and forget imagining legs with sports shoes) . The bowlers and fielders hardly used to get injured bowling bare footed or never had any sprays or sports physios to pamper.
The forty degree heat of May used to burn the hills of players but hardly mattered. The only refreshing thing was flavored and colored crushed ice (I have tried to explain in best possible way but one word for it is ‘Gola’ as we used to call it) sold by ultra clean looking street vendor. Perhaps the highest immunity booster of our times. No pandemic dared to stare at us in those days due to these time tested oral vaccines .
So the match used to end at around 5 PM and if both innings were not finished by then, match was considered as draw with both sides walking off with their collars up and heads high .
There used to be unlimited and catch the throat type controversies about umpiring decisions obviously as batting side had option of choosing main umpire (some one from their team XI only who knew nothing of LBW and who used to have prestigious University’s doctorate in partiality.
All batsmen used to behave like Javed Miandad (famous player who never thought he was out when given LBW) and most umpires had no word like neutral in their dictionary. The fights were limited to verbal depending upon the class of batsman. The stumps and bats would turn into swords if the impact of the decision was going to cost 55 paise for the team.
When regular tournaments became norms of deciding the supremacy the professionalism started to crip in with neutral umpires, nicely made wickets and well organized tournaments were some times sponsored by political parties but never by any company .
The wicket making was also an interesting task and watched by us with curiosity as specialized boys mostly from cricket teams only would dedicatedly bring cow dung and evenly spread it with a lot of skill. When dried it would turn into a flat wicket as much as seen by us in earlier days venues like Kanpur or Delhi or Nehru Stadium Pune.
The tennis cricket in Mumbai was the hottest sport that time and playing with leather ball even for school XI was considered prestigious.
The suburbs never had any proper leather ball wicket and only available wicket to practice was matting wicket (Which was also considered luxury even at the cost of injury). Though we from suburbs never repented unknowingly. it had impacted suburb talent with just one super talented cricketer from suburbs ( Bandra to Dahisar on western side and Bandra to Mulund – Thane on central side) of city represented Mumbai and then India . Many of new generation may not know him but he was Ajit Pai a Kapil Dev of Tennis ball cricket who graduated to play for India was from suburb of Vile Parle. More about his class in my next article.
By Aju Deshpande
A Sportsnasha exclusive
We invite articles on seventies, eighties era of tennis ball cricket . If you want to share any memorable match experience pl write an article and send to sportsnasha@gmail.com. Just a request. Kindly do not share your own performance related article.
We will publish the article after only it’s approved by our editorial team. 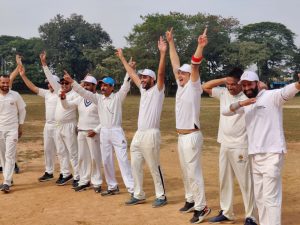