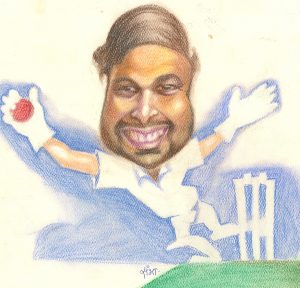 Kevin Pietersen tweeted on Rishabh Pant on his reverse sweep against Archer
in First T-20 against England recently.

Rishabh had played a similar shot against Anderson in Test match before he got 100 and turned the match upside down.
There was an era when Amitabh was on top in 1980s. But he started playing to gallery. The worst came when he danced to the tune of ‘Mere Angane me tumhara kya kam hai?’  The song became super hit among masses but Amitabh had chosen a short cut to become super popular. This could not keep him on top for long his good acting did.
Rishabh is doing some thing like this. He is trying to do things at his own risk to please masses. He may be enjoying these ultra hazardous stunts but they are not quite sustainable at highest level. When a bowler like Archer is hit like that for a six do you think he will have a sound sleep and . Rishabh has disturbed his sleep for a day but he has capacity to make Rishabh spend sleepless nights for years. Rishabh can’t jump from 20th floor every now and  then and survive,
“Khoon ka badla khoon se (Blood for blood)” Archer who bowls consistently over 140-150 Km per hour   must be mulling over,
Whatever !!!
Can anybody guess why likes of Kevin are praising Rishabh?
I find no reason other than than to ride the popularity wave Rishabh has created.
“Rishabh has done in his first few years which most great players have achieved in their entire career.” Ian Chappel said recently.
So is Rishabh not precious for India in long run? This question needs to be put to Indian team management.
Why Ravi and Virat are not warning Rishabh that such adventures can cause permanent injury and keep him out of game if not for remaining life many more crucial years.
Rishabh is 23 . He may not have seen the cricket as Gavaskar , or  Sachin or Kapil , Anil has seen. Why are they keeping mum. They must speak out openly and pull him up and make him more cautious. The flamboyance may take him to Everest in few games but deadly injuries can ground him for ever.
Let Rishabh not get over enthusiastic by air floating reactions from public.
Rishabh, as you have been ruthless to these pacers but cricket is also not less . You must not fall to Adrenaline pleasure of playing gymnastic strokes too often. These strokes need 100 percent eye hand coordination. Rishabh we want you to become long race horse not one race horse.
If Virat, Ravi are afraid to advise you ask Virendra Sehwag, he has the best experience of Hand Eye Coordination hitting.Even he slowed down in his later career to make runs.
Ultimately, till you make runs everything will be forgiven but the day you stop making runs everything will be criticized  including for those popular reverse sweeps.
Rishabh your classy cover drives and dancing down wicket sixers give equal pleasure to us.Calculated Risks are simple mantras to long sustaining success.
Rishabh, a heartfelt thought from your well wisher. Do not fall prey to tweets of Kevins and company they are motivated, purposeful  and definitely not unintentional .

Today he may have tweeted ​’​this was the best shot’, tomorrow he may tweet ‘this was the worst injury I have ever seen’

This is the reason why Rishabh Pant need not be left alone….

Out of World Win for England-Stokes the wonder boy again

Some unknown stats and facts in cricket: