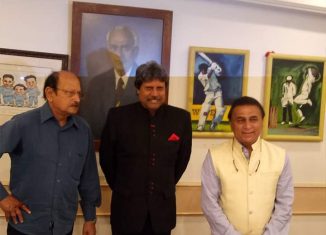 My journo friend and Cricket crazy Taus wrote today on facebook….Not only Taus , there are many such opinions that makes those era (70s) players look deprived….

So what….Taus bhai..you have a point but will you say ‘cheers’ to my view after you read this…..

In Rajesh Khanna era I mean 70s , many hard working executives were earning salary of say Rs.500 to Rs.1000 , obviously far less than what Kapil boys got) who were holding good positions in various industries in 70s or 80s and now an inexperienced executive gets six figure pay

Moreover , those office goers , excelling men in their own area were also not getting the everyday headlines or half page photos on newspaper’s sports pages like even a Ranji Cricket star would get in 70s.

Many would even dream to play Ranji trophy then if not Test match , than be a bollywood star.

May I say , players who excelled in Ranji cricket , from Parkars to Shivalkars to Mankads were recognized as big popular stars those days.

Many cricket crazy of 70s 80s would agree that it was as difficult to approach a Ranji star then as an IPL star today.

They were not easy to be lured even if one would offer an appearance money like the one is offered today.

Rather they were shy to accept any money, does not mean they were deprived.

No one, who has followed cricket in 70s , can not deny that even a good University boy who played for Mumbai University would get quite a decent job where he would just sign a muster and go for practice every day.Those were the luxuries enjoyed by cricketers in their peak or even lean days.

Most of the Test cricket stars those days were employed on plum posts and lucrative pays by private and public sectors and would be status wise equivalent a la CEO of the company.

I remember reading a news…. XYZ ( A super star batsman those days and all time ) getting Rs.10,000 per month pay in a reputed private company. Rs. 10,000 in 80s is worth 5 lakh is my guess even if I resist a temptation to exaggerate.

Top class cricketers were respected more by businessmen then than now I am sure. Today big businessmen seem to treat even most of the star players as commodity unless player himself is quite a rare self respecting guy like Rahul Dravid or few other legends.

A former Indian stylish captain reached a level of director in a public sector Bank and earned a decent money to buy a flat at rich Shivaji Park area was as breaking a news as it could be today.

And this , apart from a big size flat in a sportsmen only plush apartment in prime area of Mumbai. A dream only big businessmen could fullfill even today.

Players then on tour would always be NRIs favourite guests and had a choice to select among the umpteen invitations for parties.

Then there was Sharjah era where every year four players from India and Pakistan ( one current and one old) were felicitated with astonishing financial gifts, gold etc were offered by Hon.Shaikh Bukhari ( a cricket crazy king of Sharjah ) worth a crore in todays era.

Javed Miandad can easily buy a flat near Lords today alongside Sachin. and may also gift one to pacer ( whom Miadad hit out of ground for a last ball win) if he has judiciously invested the awards and rewards he received in some blue chip stocks.

Apart from these numerous perks (cricketers specific though) most star players were given benefit matches by BCCI which do not exist anymore.

Wadekar was given 2 ODIs vs top class west Indies team at Mumbai, where stadiums were full (total 50000 plus tickets sold at a hiked price) on both days and most of the money going in kitty former captain’s superannuation dues. Many other players, even Ranji stars have received benefit matches which raised their bank balances by half a crore atleast.

Leave alone 1983 , I have seen Wadekar and his team getting the ovation at Mumbai when they travelled in open jeep from S’cruz Airport to CCI Churchgate.
Is any one witness to better reception , I am sure , no one has got in history of Indian sports or for that matter world sport.

Was it not far more than the twenty crore package IPL star gets.

They were ( those cricketers) in heart of every Indian more than anything else.

Has anyone seen a bigger euphoria on roads and crowd dancing whole night, when Kapil and boys lifted world cup. We do not have images of that unfortunately but any one who has seen that would agree that even MSD team’s wins did deserve equal celebrations after 2007 T20 and 2012 ODI WC wins.

No doubt though that today many ordinary players earn big and are smart enough ro save the money or invest for future.

But same goes with film stars of today and yesterday…those who invested ( like Jintendra , Rajendra kumar , Amitabh and few others ) are still living a paradise type lifestyle while those who were over spenders are the ones who are almost on roads.

In the same way cricketers who batted intelligently off the field can still afford a Virat Kohli lifestyle. No matter which era they played.

Now no cricketer gets a permenant job like in era of 70s with luxury of going to office just to collect the salary cheque.

My friend in Air India would often tell stories of the ‘papmpering’ players received in those days and the situation today when getting a 3 year job contract is harder than getting an IPL break.

Times have changed for many professionals but cricketers in our country have always earned better than any one else in that era not just big bucks but superstardom even a bollywood actor would be envy off. Period.