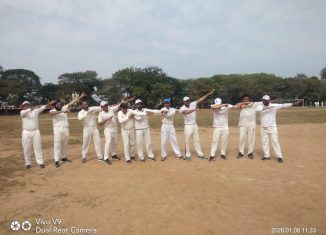 “Today eat one banana and sleep’ our cricket coach was telling us in a so called team meeting before a first match of Mumbai based inter school U14 Giles Shield of our school .
My school PTVA was going to play against Ismail Yusuf High School in first ever match of Giles Shield .This was in 1974.
We used to get 10 Rupees for match allowance  which included local train return ticket from Vileparle to Churchgate and we were as motivated as Mumbai indian player.
It was exciting to meet at railway station at 6 AM with entire team’s kit ( Juniors were supposed to carry it without uttering a word) . We had to jump like a trained sprinter to catch a train and get down at Marine lines.
We could then have a high calorie  ‘ burun maska pav  tea ‘ break fast at a famous Irani restaurant near Parsi Dairy, put 25 paise coin in a juke box  to listen to some nice hindi song along with team mates and then march for  Azad Maidan one km away.
Having a match at cross maidan was luxury and Oval Maidan , make no mistake  was like Lords for us .
Dreaming to play on Bombay Gymkhana ground was more difficult those days  than getting a break in bollywood.
Azad ground was like a Ladakh road except for a rolled cricket wicket (if a groundsman  was not alcoholic)  every inch of a ground could test your calcium level. Only ground in the world where third man boundary could be as near as third slip and square leg boundary could be as long as Melbourne Cricket Ground with many pits and stones as invisible fielders.
We had not heard a word called physiotherapy those days leave alone sports physio so no question of crying about pain even if injured. Mind well it was no helmet era though we were not up against Marshal and Holding .
Our lunch during match used to be again at a nearby  Irani Restaurant ( behind Metro Cinema)  and it was most  relishing time of our match (especially for a ‘vegetarian at home and non vegetarian outside’  like me) .

We won three rounds just with lots of team spirit and love for game. Wonder, we ever discussed our allowances or hardships. Entire team  often played with just  two bats .
Our fourth round was with rich boys school from Mumbai Suburb

Their team used to arrive in special luxury coach , eat packed tempting Biryani . Coke was not their sponsor but they could enjoy it in drinks while we fearlessly had Azad Maidan Mineral Water Company’s immune System testing water containing all viruses except Corona may be. Nearest convenience place to release pressure was @Churchgate  station.
All said and done we gave extremely tough fight to those smart guys and lost.  We were more spirited and equally competitive though.
Taking into account our coach had never taught us any batting or bowling skills apart from a dreaded high catch practice we did fine job.

Mat was our practice wicket and stones under mat were our batting coach.

Many middle class majority schools (like us)  from Mumbai viz.Shardashram , Balmohan played a classy cricket and were ideal breeding ground for international players as they were blessed with Anna Vaidya sir and Achrekar sir as coaches.
Giles Shield and  Haris Shield cricket (played mostly on Azad Ctoss and Shivaji Park Gtounds) of Mumbai  was and is a real grassroot cricket which not only nurtures good cricketers but also built a person’s character to make him ready to face most of the challenges of life.

Azad Maidan experiences ( with a unique package of extraordinary facilities )  are must for every kid to become a stronger tougher and resilient human being. Any one who has played on these ground will not disagree.