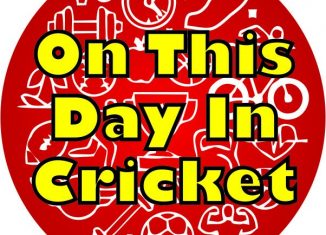 On this day in 1933 happy birthday to the West Indies allrounder O’Neil Gordon ‘Collie’ Smith. He was an attacking batsman and a handy off spinner. He was called “the Mighty Mouse” by his fans and team mates for his incredible skill and power. He hit Sonny Ramadhin for three sixes in 1953 during a trial match in Jamaica. He was highly rated in West Indies.
Smith smashed 169 in only his third first-class game for Jamaica against the touring Australian side in 1954–55 against the formidable attack of Alan Davidson, Ray Lindwall, Keith Miller, Richie Benaud, Ian Johnson and Ron Archer. After that, he was immediately drafted into the team and he started his career by scoring 104 on his debut match at Jamaica.
He died at the age of 26 in a car accident. The accident happened on 7 September 1959, when he was travelling with his West Indian teammates Garry Sobers and Tom Dewdney. They were driving to play a charity match at London. Sobers was driving the car. Smith was sleeping on backseat. Suddenly, Sobers got blinded by the dazzling light of another vehicle and the car got collided by a cattle truck on the A34 near Stone in Staffordshire.
Garry Sobers suffered dislocation of his wrist bone, a eye cut and a severed nerve in the finger. Tom Dewdney lost his few teeths. but, Smith suffered spinal injuries and slipped into coma from which he never regained consciousness and died after three days.
The cricket community was shocked and  Smith’s body was taken to Jamaica where 60,000 people attended his funeral. This speaks how popular he was back then.
Smith’s final figures show 1,331 runs at 31.69 and 48 wickets at 33.85 in 26 Tests. He has shown only sighting of his enormous talent. These stats would have been improved with time. If fate had not snatched him from our midst. At 26, he was actually maturing into a great all-rounder. With guidance of Sobers alongside him, Smith could have driven the West Indian team into  an unrivalled powerhouse of all-round strength. In 1958, he was chosen as one of the Wisden cricketers of the year.
Sir Garfield Sobers once said, he believed his career was made better because he played his game for both himself and Collie Smith.
On march 2018, Collie Smith statue was  unveiled at his home town ”Boys Town”  Jamaica. The road passing Boys Town Club in Trench Town is also named as Collie Smith Drive in his memory. The upper western wing in Sabina Park was named as the Collie Smith Wing, in tribute to the late great. Happy birthday to ”The Mighty Mouse”  the one of the favourite Sons of Jamaica.