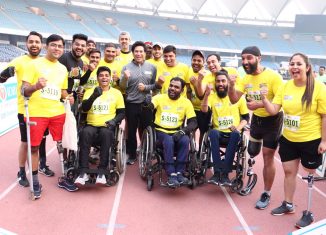 Army Sports Institute’s (Pune) Rashpal who began as a strong favourite, lived up to his top billing, finishing the Full Marathon (42.2k) with an impressive time of 2:23:29 hours to pocket the coveted title.

Jyoti of Maharashtra too proved to be invincible in the women’s category, winning the title in a canter. She completed the gruelilng Full Marathon, which was flagged-off from the Jawaharlal Nehru Stadium, in 2:50:37 hours, finishing almost 8 minutes ahead.

IDBI Federal Life Insurance brand ambassador Sachin Tendulkar flagged-off the races and inspired the runners with a heartfelt rendition. He even obliged star-struck participants with selfies and later in the day honoured the winners too.

Rashpal, who has been going through a great run of late, maintained a steady pace to keep his nose ahead of the rest, increasing his speed only during the final phase to come out victorious. Arjun Pradhan, representing the Indian Army, claimed the runner-up position after he took 2:24:18 hours to finish his run while his team-mate Sanvroo Yadav ended with a time of 2:25:34 hours to win the bronze medal.

While the men’s category was a closely-fought affair, the women’s competition turned out to be a lop-sided affair, with Jyoti winning by a huge margin and consolidating her position as one of the top marathoners of India.

Swati Gavhade won the silver medal with a time of 2:58:10 hours while Jigmet Dolma had to be content with the bronze after she completed the full marathon in 3:03:10 hours.In the 21.1k Half Marathon, Brimin Kipruto Komen bagged the top prize in the men’s category by clocking 01:09:27 hours. It turned out to be a tough fight for the second place with Ajeet Singh eventually claiming the second spot by posting a time of 01:10:34 hours, just .9 seconds ahead of Amit Khandur.