Skip to content
You are here
Home > Sports for all Hyderabad > Sports For All Championship begins in Mumbai, over 13000 students vying for top honours Shantanu Patil, Adarsh Singh break SFA Record on Day 1 of Athletics 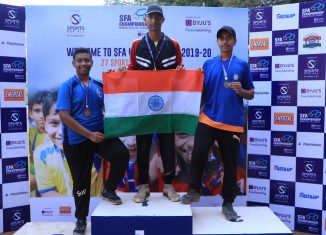 The Sports For All Championship, powered by Byju’s, got underway here on Monday, with over 13000 students battling it out across a total of 24 disciplines, aiming to clinch top honours over the next 12 days.

In its fifth year of existence,  SFA Mumbai has carved a niche for itself as the biggest multi-discipline school sport competitions of the the city.

The sporting extravaganza will be held across the city’s most popular sporting hubs, including the Mumbai University Sports Complex Kalina (Santacruz) where a total of 18 sports will be conducted. The championship will see the young and upcoming athletes from age categories 6-18 years compete in sporting disciplines including athletics, tennis, badminton, table tennis, swimming, volleyball & football.The Athletics event which began today already started making waves with as many as two young athletes shattering previous SFA records.

Shantanu Patil of Bhavan’s Junior College made his presence felt in the Under-18 Boys’ 100 m event by registering an impressive timing of 0:12:05 secs, with a whopping 28 second margin from the previous SFA record for this category. This was also Patil’s debut appearance in the SFA Championship.

Gurukul Educational institution’s Shubham Bhosale clinched the silver in this category, with a decent timing of 0:12:58 secs, while his schoolmate Subhan Sadik Ali had to settle for bronze for finishing the race at 0:13:69 secs.

The second record-breaking athlete of the day was Adarsh Raj Singh of Sanjivani International School, who conquered the U-14 Boys’ Shot Put event. Singh registered a commendable 12.44 mts, shattering the previous record of 8.68 mts.

Krishh Patil of JBCN International School (Borivali) was the second-best performer in the category, achieving a distance of 10.21 mts, while VPMS Vidya Mandir’s Shantanu Shashank took home the bronze medal with the final mark of 9.50 mts.

Elsewhere, at the Maharashtra State Lawn Tennis Association, Cuffe Parade, the preliminary rounds of the tennis event saw over 300 participants compete for the ultimate prize in the male and female categories.