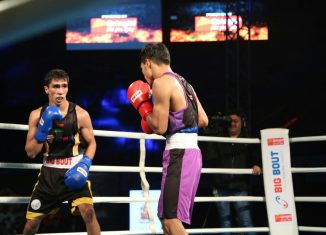 New Delhi, December 17: NE Rhinos and Punjab Panthers, fighting to avoid a meeting with Gujarat Giants in the semifinals, locked themselves in an intense contest in the Big Bout Indian Boxing League at the Indira Gandhi Indoor Stadium here this evening. The teams were tied 1-1 after the opening two bouts the climactic match in the league stage.

NE Rhinos drew first blood through Ambeshori Devi Huidram who beat back a second round surge by Sapna Sharma to earn a 4-1 verdict in the youth women’s 57kg battle. However, Punjab Warriors pulled one back through Uzbek Youth Olympic Games gold medallist Abdulmalik Khalakov’s impressive victory over southpaw Mohammed Etash Khan in the 57kg bout.

The Nikhat Zareen-led NE Rhinos became favourites to win the match when it became known that Punjab Panthers captain, legendary MC Mary Kom had been advised rest owing to a bad back. Nikhat Zareen holds a 3-0 record in Big Bout while her team-mate Mandeep Jangra has been unbeaten in four starts.

However, a smart decision by Darshana Doot, nominated to fight against Nikhat Zareen and to lead the team on Tuesday, balanced the contest. She blocked the 75kg clash when she won the toss. With Argentina’s Francisco Veron boasting of a 3-0 record for the Rhinos, it was no surprised that his bout with Rakesh Kumar was blocked.

The Panthers, who left the seasoned Manoj Kumar out of the line-up in favour of Rakesh Kumar, would expect former World Championship finalist and reigning South Asian Games champion Sonia Lather to add a point to their tally. They would then pin their hopes on PL Prasad to beat Laldwin Mawia in the 52kg bout and on Sagar Chikara to defeat Ergashev Timur in the 91kg clash.

At the start of the match, the teams were locked at 15 points apiece behind Gujarat Giants (22), Bombay Bullets (18) and Odisha Warriors (16) and ahead of Bengaluru Brawlers (12). They were aware that all they needed to do to get to the semifinals was pick up two points from this match. Then again, the winner of the match would get to avoid the formidable Giants in the semifinals.