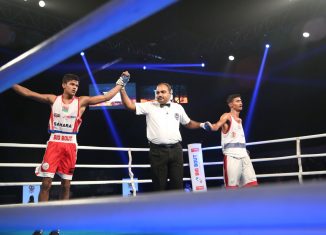 New Delhi, December 13: Bombay Bullets made the most of the opportunity presented by a tactically relaxed Gujarat Giants and churned the fight for the top four slots in the Big Bout Indian Boxing League with an unexpected 4-3 victory late on Thursday and set the stage for the league to get more exciting as it approaches the home stretch.

With 14 points in their kitty from their earlier matches, Gujarat Giants made a conscious decision to rest their mainstays like skipper Amit Pangal (52kg class), former world champion Sarita Devi (women’s 60kg) and Mohammed Husamuddin (57kg).  In fact, after winning the toss, they blocked Chirag’s 57kg class bout against Kavinder Singh Bisht.

For Bombay Bullets, who have fielded an unchanged line-up in their three matches, Naveen Boora and Ananta Chopade were the heroes on Thursday night. The effervescent 20-year-old Naveen Boora beat Duryodhan Singh Negi in a hard-fought 69kg battle.  Ananta Chopade (52kg) was a class act as he gained a unanimous verdict over Pangal’s replacement, Sanjay Kumar.

These victories sandwiched winning efforts by Spaniard Emmanuel Reyas who beat British champion Scott Forrest in the 91kg battle and skipper Ingrit Lorena Valencia who held back a challenge by Monika in the women’s 51kg bout for the team to open up a 4-0 lead over the table-toppers.

Gujarat Giants needed to pick up at least a win to retain their place at the top of the table and the first of three wins came through Parveen Hooda. The recently-crowned South Asian Games champion outclassed Spaniard Melissa Noemi Gonzalez in the women’s 60kg bout by making the most of her height and reach to quell Bombay Bullets’ hopes of storming higher on the charts.

Gujarat Giants paraded some of their might through Ashish Kumar who won the third time in four starts, this time picking up a unanimous verdict over Prayag Chauhan in a close fight. Poonam rallied from being at the receiving end in the opening round of her Youth Women’s 57kg bout to turn the tables on Priya Kushwaha to earn her third successive victory.

The Mary Kom-led Punjab Panthers will take on Bengaluru Brawlers, who are bringing up the rear with six points from three matches so far, on Friday evening.