Skip to content
You are here
Home > Motor Sports > Stage set up for JKNRC’s grand finale, the JK Tyre Festival of Speed 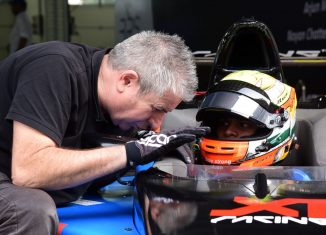 India’s most eagerly awaited motorsports show, the JK Tyre Festival of Speed, will get underway at the Buddh International Circuit this weekend, with India’s most celebrated racers and many international stars lining up for top honours and glory.

Along with India’s first Formula 1 driver Narain Karthikeyan, the League will also see the likes of former Force India driver Tonio Liuzzi, Malaysian hero Alex Yoong and legendary F1 driver Niki Lauda’s son, Mathias, in an exciting new format that should thrill the over 35,000 fans at the BIC on Sunday.

Each team boasts of an International Male, International Female, Indian International and two Indian domestic drivers who will not only have to show great skill and speed but also perfect teamwork and co-ordination to clinch the first of the two rounds.

The many battles in the two important categories of the 22ndJKNRC, the LGB Formula 4 and the JK Tyre Suzuki Gixxer Cup, will also provide their own thrills. Chennai’s MSport teammates and rivals, Vishnu Prasad and Raghul Rangasamy, are set for one last showdown this season in the grand finale.

Vishnu is in the lead with 68 points but Raghul is just 5 points behind and both will aim to go all out in their quest for supremacy. The two might well square up in the X1 League too, with the former pairing up with Nayan Chatterjee (Team Bengaluru) and the latter with Ashwin Datta (Team Delhi) as Domestic drivers.

Among the local talent, ace rally driver Gaurav Gill (Delhi) and young prodigies, Arjun Maini (Bengaluru) and Kush Maini (Mumbai), are expected to put up an enthralling contest in the league.

In the JK Tyre Suzuki Gixxer Cup, Tanay Gaikwad of Pune is sitting pretty with 54 points. One of the standout performers of the season, he will start as a strong favourite for the title. Syed Muzammil Ali of Bengaluru is, however, just 6 points behind and will surely fancy his chances over the weekend.

The JKFOS has an international flavour for bike lovers too, with Round 3 of the Asia Cup of Road Racing spicing up the extravaganza. Top bikers from Asian countries like Japan, India, Nepal and Philippines will look to consolidate their position on the points table in the FIM sanctioned event.

Like every year, super bikers will also be vying for titles in the JK Superbike Cup in 1000cc and 600 cc classes, with close to 50 top riders from the country registered for the two events put together.

Apart from all the hardcore racing, JKFOS will see a complete bouquet of entertainment package including, stunt shows featuring international names like Mike Jensen from Denmark, live DJ music and a special act by renowned Punjabi pop singer Daler Mehendi.

“This weekend is special in terms of its grandeur & packaging. The X1 League is easily the most exciting part of the weekend,” Sanjay Sharma, Head of Motorsport, JK Tyre, said.

“Spectators and television and online viewers can watch racing like never before right here in our backyard. In addition to stiff championship battles in all our prime categories, everybody, young and old, male and female, can hope to have an enjoyable day.

“Joining us, will be a number of MPs who will be part of the JK Tyre Constitution Club of India Car Rally for Parliamentarians that will be flagged off early in the day and will culminate at the BIC,” he added.