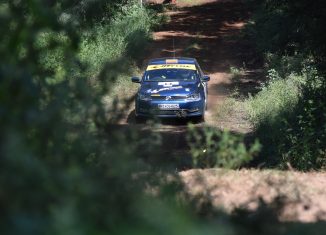 The JK Tyre Motorsport stalwart’s car too bore the brunt of the K-1000 Rally’s punishing stages along with many other favourites; but he still managed to be ahead of the 50-strong pack, exhibiting caution and control, rather than speed and aggression as is his wont,. He, along with the wily Musa Sherif, won SS1 and SS3 and finished fourth in SS2 and third in SS4 to garner a healthy lead of almost 50 seconds going into the second and final day.

His teammate Karna Kadur (Nikhil Pai), coming on the back of two disappointing rounds, showed his mettle to take the second position behind Gill in the INRC class. Arka Motorsport’s Karna even won SS4 with an impressive timing of 12:24.200 to show that he was coming into his own and could be a major threat on Sunday.

“It was an exciting day, opening up the championship in this penultimate round,” Hema Malini Nidamanuri, co-promoter of the rally, said. “We got to see some amazing driving and I am sure it’s going to be even more fun on Sunday,” he added.

Championship leader Fabid Ahmer, an MRF driver, opted for the smart option, driving steadily in each of the four stages, with the finishing post in his mind. He was in the sixth position at the end of the day and could well go full throttle on the big day.

If his strategy works, with a handy overall lead of 22 points over Gill, the INRC 3 contestant (with Sanath G as co-driver) can hope to go into the last round in Kochi next month as the championship leader.

The Team Champions driver, however, would be watching another JK driver carefully: Dean Mascarenhas. The local lad (with Shruptha Padivel) was within striking distance of him, taking the third position after Day 1. Trailing by just 7 points to Fabid’s 49 in the race for the INRC title, another good run from him could see a change in the leader-board.

Dean, meanwhile, continued to hold sway in the INRC2 category, although he had Dr Bikku Babu (Milen George) breathing down his neck. The good doctor was the clear surprise package of the day, going past the winning post in SS2; he even left Gill in his wake in SS4, taking the second place to Gill’s third, and claimed the fifth position in SS3 and the 6th in SS1 to boast of the best show of the day.

In the INRC 3 class, Chetan Shivram (Dilip Sharan) surprised the category leader Fabid, taking 54:28.500 minutes for his four stages. The INRC 4 saw Vaibhav Marate suffering a setback, withdrawing from the first stage itself after a mechanical problem. He should, however, be back in action on Sunday to put his title aspirations back on track.