Skip to content
You are here
Home > Motor Sports > Fabid, Dean-Gaurav showdown adds spice to Round 4 of INRC 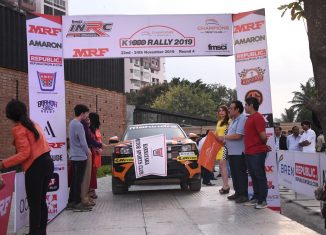 Bangalore, November 22: Just like the good old days, a battle royale between the Reds and the Yellows is on the anvil as the Champions Yacht Club FMSCI Indian National Rally Championship enters its final stretch, with its Round 4, the K-1000 Rally, set to begin here on Saturday.

INRC Championship leader Fabid Ahmed and INRC 4 topper Vaibhav Marate, both supported by MRF, are comfortably placed in their categories and look poised to end the year on a high note. Fabid, the Team Champions ace, with Sanath G as his co-driver, is also leading his INRC 3 class, which will give the Reds a near sweep.

He will, however, be wary of the bunch of JK Tyre drivers snapping at his heels. Dean Mascarenhas, co-driven by Shruptha Padival, is just 7 points behind Fabid at 42 and has the speed and wherewithal to go all the way in the last two rounds.

Dean is anyway leading the INRC 2 class with 65 points and can hope to pocket this trophy for JK. He is followed by another of his stablemate, Younus Ilyas (42 points), which makes 1-2 a high possibility for them.

“We have a very strong field of 56 teams in this round too, creating a record in itself,” Vamsi Merla, the promoter of INRC, said. “Every category is very closely contested, with the backing of two very strong supporters. This is what motorsport is all about,” he added.

Fabid and Dean will, however, keep their eye on Mahindra Adventure’s Gaurav Gill. The JK ace, with Musa Sherif as co-driver, is trailing in the fifth position, 27 points behind the leader.

But after a forced break for nearly two months, the beleaguered driver will be keen to get back to his winning ways. Two good weekends and a little bit of luck can turn the tables on Fabid and catapult him or his teammate Dean to the top of the table.

“I have always enjoyed driving here in the K-1000. I am really looking forward to go out there and enjoying myself. Hopefully, things will turn in my favour this weekend,” Gill said.