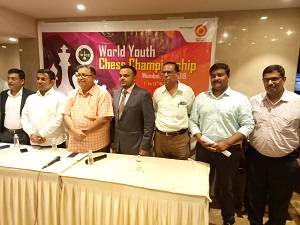 
Mumbai, September 26:  Six world crowns will be at stake when the prestigious World Youth Chess Championship gets under way here on October 1.

As many as 66 countries and 56 title-holders, including three Grand Masters, will be seen in action over the next fortnight. Six out of the 450+ participants, including 145 from India, are also world champions.

India’s latest sensation and the world’s second youngest Grand Master Praggnanandhaa R will be the star attraction, in what is the biggest chess tournament ever held in India. Sargsyan Shant (Armenia) and Iniyan P (India) will be the other GMs in the fray.

The six titles up for grabs are in the Under-14, Under-16 and Under-18 categories for both boys and girls, it was announced here at a press conference.

“I am so glad that we are organising this important tournament. I hope to see many more such mega-events in India,” GM Harika Dronavalli, Padmashri and Arjuna Awardee, said, conveying her best wishes to the Indians over video.

“I started my professional career with the World Youth Chess Championship in Spain 2000. I won 5-6 medals in these championships which put me on my long journey to the top,” she added.

GM Koneru Humpy, another Padmashri and Arjuna Awardee, remarked: “India is probably hosting a tournament of this stature and magnitude for the first time. It is a great opportunity for young kids to watch, learn and get inspired by rubbing shoulders with other budding international stars.”

Apart from Chennai-based Praggnanandhaa, Nagpur’s Divya Deshmukh will also be the cynosure of all eyes, especially as the latter will spearhead the girls’ challenge for the country.

“This is a great honour for India,” Pravin Jain, chairman of the organising committee, said in presence of other top officials. “We hope to take the love for chess in India to the next level through the WYCC. I am positive that our young boys and girls will take it up in a big way after this,” he added.

Russia, USA, France, Italy and Azerbaijan will be a few chess powerhouses to watch out for in the tournament, organised under the aegis of the All-India Chess Federation by the All-Marathi Chess Association. The tournament itself will be held at the Renaissance Hotel in Powai.

India has traditionally excelled at the youth level, bagging several gold, silver and bronze medals since the WYCC was introduced in 2004.
“We would like to thank FIDE for this opportunity and are looking forward to playing host to such a wonderful tournament,” tournament director and Fide Asian Zone 3.7 president Ravindra Dongre said.