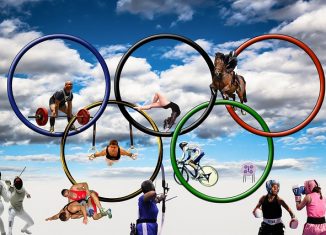 With less than a year to go for the start of Tokyo Olympics we rewind the history of Olympic Games.

Olympic Games are leading international sporting events which are held every four years.IOC is the governing body of Olympic Movement with Olympic Charter defining its structure and authority.
1896 Athens

Modern Olympics were first held in Athens,Greece in 1896.These Games brought together 14 nations and 241 athletes who competed in 43 events.USA topped the medals tally with 11 gold medals.However hosts Greece won 46 medals which were more than double of medals won by USA.There were only 10 individual nations who won medals.Interestingly,no gold medals were awarded as the winners were given silver medals.

1900 Paris
The second Modern Games were held in Paris,France.More athletes than spectators attended 1900 Paris Games.Football was the first team sport added to the Olympics in 1900.Women were allowed to compete in lawn tennis and golf.Cricket made its only appearance at these Games.Pigeon shooting was a sport in 1900 Olympics.It was the only time animals were killed on purpose during an Olympic event.In long jump event, American Myer Prinstein finished second despite not even showing up for finals held on Sunday due to his Cristian beliefs.Hosts nation France topped the medals tally with 100 medals followed by USA and Great Britain.Norman Pritchard became the first Asian born athlete to win an Olympic medal when British-Indian sportsperson won two silver medals in Athletics in 1900 Paris Games.
1904 St.Louis
In 1904, Olympic Games were held in St.Louis.These Games were well short of international competition as only 13 countries took part.One of the most remarkable athletes was American Gymnast George Eyser who won six medals even though his left leg was made out of wood.These were only Games where distances were measured in yards.USA topped medals tally followed by Germany and Cuba.
1906 Athens
The first,last and only Intercalated Games were held in Athens in 1906.Medals won in these Games are considered unofficial by IOC.France topped medals tally followed by Greece and UK.
1908 London
London hosted Olympics in 1908 with more than 2000 competitors in over 100 events.These were the first Games where athletes marched into the stadium behind their nation’s flags.Hosts nation Great Britain topped medals tally followed by USA and Sweden.
by Shailesh Padhye for Sportsnasha.com
Feature Image Image by Gerhard Gellinger from Pixabay