“He is not wearing an arm guard” my son was worried more than Aussie batsmen facing Archer in second test match at Lords versus England . “It’s dangerous ! It could break his arm” I quipped. Coincidentally or unfortunately intimidating Archer hit Smith on Arm and little master who is in peak form trying to appear ok , looked to be in deep pain.  After few overs Smith fell down after being hit on backside of the head (A ‘stem area’ as they call it , a new word added to my cricketing dictionary) .

This almost brought up memories of Philip Hughes of Australia who died due to head injury after getting a blow from a fast bowler’s bouncer.

Well well well , those born after 2000 would slowly forget there was something like landline phone and those born after 90s would not believe batsmen before 80s braved head hungry bowlers, with no bouncer restriction rule with just gloves, pads for protecting body parts. Luckily for batsmen , most critical protection , an abdomen guard were timely invented .

So for guys who watch Test Cricket more passionately than T-20, Lords Test has created a big debate whether Stem Guard Helmet need to made mandatory ? It looked funny that  a substitute batsman (for the first time in history and would soon become a necessity) was allowed in place of concussion injury ( one more word added to my cricketing words database) player.  Highest safety measure do not guarantee insurance to life or life threatening injury when bowlers like Archer, Cummins , Starc and few other fearsome chaps are on the scene.

This brings us to revisit days of ‘no helmet, no arm guard , no thigh guard era’ . We were unfortunately fortunate to witness  that lethal and unplayable bowling attacks of West Indies, when combined speed of bowling was six hundred Kms per hour. We had seen a famous Indian all rounder running from middle stump to square leg with every step of bowler’s runner up in Australia against Thompson in 1977 series. We have seen a bowling pair against which hardly any team could cross  300 runs. We have heard Anshuman Gaikwad’s (a coach selection committee member of today) taking blows all over except his bat and moreover no doctor help was made available for his bleeding ear when he retired hurt and was rushed to pavilion . The blow ultimately resulted in life time hearing loss for Anshuman.

We have seen West Indian weapon Malcom Marshall hitting Gatting on face with a nose bone getting stuck on the red cherry. We have seen no restriction on bouncers even when tail-enders batted. Cricket rule books were sans restriction on beamers rule (may be I need to explain current crop of cricket fans the meaning of beamer)

We had heard Indian captain , Nari Contractor’s skull being broken by Charlie Griffith’s bouncer in West Indies. So, time and again it is proved Test cricket is different cricket and bowlers seem to be taking revenge of being handcuffed in ODI and T-20. BTW Thank you Mr. Archer for giving a grand opportunity for test cricket fans like us to take nostalgic walk of 70s and 80s.

Our own Sunny bhai , the perfect opening batsman of all time, was first god of fast bowling , who would play the furious  four with optimum confidence . Latest technology has given us scratch proof glasses , Sunny had invented scratch proof body technique on his own . Statistically Sunny had upper hand over another god of fast bowling G.R. Vishwanath who was supreme artist and  would invariably blossom when runs deserted others on a deadly bowling tracks.

GRV had played many knocks and rescued India from a dire state to win a game. Such was his class that we can take liberty of mentioning that it was just one virtue of his batting. His out of the world knocks were many but in view of the current fast bowling drama, I can’t resist the temptation of talking about his best (according to my analysis) .

It was 1977-78 series between West Indies and India,  in India. West Indies had a depleted squad due to Kerry Packer controversy , where all top cricketers were hired by Australian TV ‘Channel Nine’.

West Indies , though had second batch of blood hungry beasts , ready to have a go at unprotected guys with just a stick to defend. Against this  second grade team of West Indies, Indian could not win first three Test matches , despite being a home series. Fourth Test was at Madras, where floods in earlier weeks had ruined the wicket and made it unplayable from first ball.

India bundled out West Indies on first day for 228 with so called  Indian fast bowlers claiming six wickets. You may imagine the state of wicket when Indian fast bowlers (of those days when spinner ruled ) could take a big chunk. When India batted India lost two quick wickets and one of them being Sunny other was Vengsarkar who was by then was considered a future of Indian cricket. Not just they (both) lost their wickets trying to save the precious head, they were not able to defend the good-length bouncers (mind well not short pitched bouncers) In terms of blows to body , it must have been twenty for 11 . In comes this man GRV , the second god of fast bowling . He has earlier played some classy innings in Test cricket on sticky wickets but this was not just sticky but life threatening . Vishy had his own way to tackle and instead of getting bogged down he just cracked lose with stylish shots on the off side, left few ones that got up sharply from no where with a self derived innovated side on technique and rescued the sinking boat with a ‘innings of a century’  (124 with 17 fours) or a millennium may be. Second highest score for India  was 33 . India made 255. West Indies were  dismissed for 151 in second setting India a moderate looking chase of 125 . The fourth innings targets are often tricky especially  when pitches misbehave. Indian openers again could not survive the few overs before close of play and were struggling at 17 for 3 . The 125 target now looked like 425 with every ball life threatening. As usual this little champ GRV displayed his heavenly class to score quick 31 and with Kapil Dev scoring quick 26 gave India a badly needed victory. The score card never tells how was wicket , what was playing condition , hence it is imperative for lucky eye witnesses like us to tell a real story.

“Leave alone scoring, not getting hurt was our first priority” said Dilip Vengsarkar who (was happy to take a pair instead of a bandage on his head) along with Sunny together could score total of 5 runs in four innings after being dropped thrice and getting unwanted body massage from West Indian pacers . GRV the little man merrily scored a hundred on such nasty pitch without helmet. Ironically this was the only test which India won in that five match series. In all other matches there were more than 20 tons scored by both sides. The above innings speaks a lot about VIshy the unsung star of deadly conditions.

Wicket condition matters a lot in cricket and only ‘genius raised to infinity ‘ can bat on graveyards without helmet. GR Vishwanath who has 14 centuries in Test cricket but those who have seen him batting would agree they were worth thirty plus hundreds for country . Cricket critics would  not also contest that apart from his hundreds he had scored many other match winning forties and fifties as well.

“Not just Hats off but Helmet off to Vishy , Sunny and all those who fearlessly not just stood up and survived the rocket launching machines but scored tons of runs in zero protection era of world cricket” What say guys??? 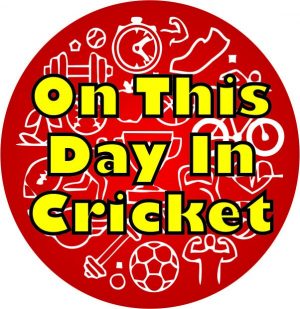