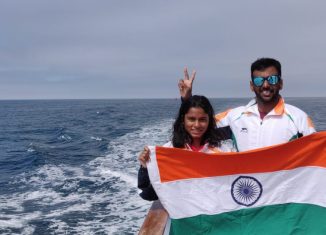 Last two weeks have been great for Indian Sports with Sindhu Winning World Championship in Badminton and Manasi Joshi winning Para Badminton world title. There were other cricket performances as well from Ashes by Ben Stokes and Rahane in West Indies,

However young prodigy Kumari Anushree Munj making waves in swimming arena on independence day was also one of the most sensational achievements.

Anushree Munj swam one hour in Dark in high current and 2.5 kms in rough waves finished with her team Rohan More, Elvis Hazarika,Rimo Saha, Chetan Raut, Jagdish Chandra Teli and Satindra Singh Lohiya who have earlier swam English Channel para Swimming relay too.
Catalina Channel Swim is toughest swim in the United States of America, and also part of Ocean Seven Swimming Challenge. This challenge is considered to be the most Adventurous endeavour in Open water swimming .
Catalina Channel Swim is between Catalina Island and California Mainland, USA. This part of Pacific Ocean is particularly infected with Sharks, Whales and Jellyfishes which makes more adventurous and difficult for swimmer to cross the Channel. Along with this cold water temperature of sea (16c to 18c) adds on difficulty of Hypothermia to swimmers.

Anushree said “Our Indian daughters should showcase the potential of Women who are capable of taking on such daring attempts and scaling new heights. This is an opportunity for me to break the stereotypes.”

Pune-based swimmer Rohan More is Anushree Munj’s Coach for Catalina Channel open seas says Anushree became the youngest indian swimmer to cross the Catalina Channel in Relay team. Inspite of the youngest kid in team, She always impressed the team by her energetic performance and now she has become truly a role model for her generation as her hard work and dedication pays off.and the team. He is also the first Asian as well as the first Indian to swim across the Ocean Seven. Rohan is the youngest person in the world to swim across the Ocean Seven.