Skip to content
You are here
Home > Cricket > An Evening with Legend of Indian Cricket, Sunil Gavaskar 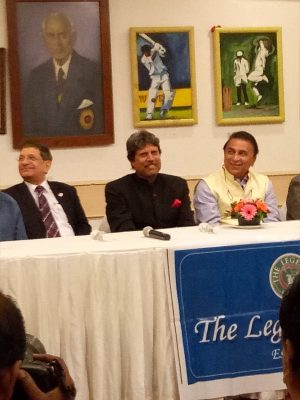 Sharing on the occasion of the all time great  SUNNY’s birthday , sweet memory of that function.

I was lucky to have attended a special function at Legends Club CCI Mumbai in January 2017 and was overwhelmed by the presence of two legends Kapil and Sunil Gavaskar and many other stars of India Cricket,
Sunny was having fever and gave a short and sweet speech where he praised Kapil as only man who could win many many matches for India not just a one or two.
“Sunny was not only the best in the game but for the game also” Kapil had observed something only he could.
“Kapil had tremendous energy and how could I have dropped him, a Sole match winner , against England in a Test. Though I take responsibility of same as a selection committee member who had no voting right.” Sunny spoke and clarified about dropping Kapil once.
Kapil started his speech with tribute to Sunny “My grammar in cricket and vocabulary of English both are not good like Sunny’s ” Greatest Indian all-rounder speech at a legends club function at CCI Mumbai was full of big shots.
“We played cricket for passion and not impression. Never wanted to show off in English or mint money” Kapil expressed yesteryear’s genuineness.
Playing cricket for India was not considered a status but a clerical job in Government was definitely one , in those days especially in north India “My Father- in -law asked me if I was doing something (to take care of would be wife) when I told him I played only cricket. In north playing cricket does not make you eligible for marriage” Kapil was humorously true in putting the facts of life in front of everybody.
.
“I got to understand and gained many things from Mumbai cricket including my wife, I am your son in law” He played a lofted shot through midwicket.
“In the marathon, first step is necessary and legend club launch was a great initiative to keep sports culture intact . We can have tea with greats during such functions ” Kapil appreciated that club was for all sports not just cricket.
“My first interview was by Hindu, an English daily.I just tried to escape by seeking to run for washroom. My friend even tried to gave me option for going to movie instead. Though I did speak Punjabi English and scraped through ” Kapil was candid and straight as usual.
When somebody asked from the crowd “Speak in Punjabii” Kapil quipped “After so many years I have started speaking English learning it hard way and now you want me to go back to Punjabi? “
Having four test captains ( Nari Contractor and Ajit Wadekar were also on dais) was a great occasion for sports lovers.
Madhav Apte ex Test cricketer introduced about club. Rahul Mankad also spoke about the club and his association as a first Class cricket player with Kapil and Sunil.
An overflowing CCI hall witnessed felicitation of two greats of Indian cricket by sportslovers, a truly memorable event.
The club started with Rajsingh Dungarpur’s blessing for honouring legends like Vijay Manjrekar, Vinoo Mankad and Vijay Merchant, has come a long way keeping up the tradition and standards of Mumbai Cricket .
Nowadays we attend lot of functions with quickly expirable twenty twenty soul but this one had a heart and soul of a Test match.
by Aju  Deshpande
A sportsnasha exclusive