Skip to content
You are here
Home > Cricket > My Man of the Match is Virat ! 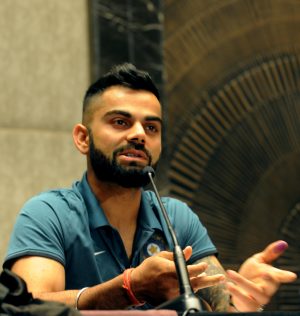 “Whatever mistake they did was accepted by them and they suffered, why you want to call them cheat again? According to me it’s not acceptable” Virat said something on these lines in a press conference after the match. Before that in a hard fought match Virat had angrily warned Indian fans not to boo Smith (and Warny ).

Virat, hats off to a human extraordinary in you. No one can ever doubt that you are one of the greatest when you hold a sword like bat in your hands and demolish the opposition without semblance of mercy. You carry a lot of ruthless fighting spirit  and display it in form of your flamboyant reactions  on the field and everyone loves it . You have a contagious energy You are simple and straight than many big stars  that makes you bigger .

‘I was imagining myself in place of Smith and felt bad at that time when public was chanting a (shameless) ‘cheat cheat’ chant as if Smith was a billion dollar fraudster accused acquitted without trial.’ was the between lines meaning of your (Virat’s) press brief after the match I guess.

Virat you had right to reprimand those vulture like minds. Let us all be clear, whatever had happened when sandpaper controversy became a talk of town, every cricket fan was upset .

Appropriately law took the charge. Smith and company was handed over a one year exile. Smith , Warner lost their captaincy, vice captaincy respectively as well and their golden careers suddenly looked like turning into ashes from which even phoneix wouldn’t have risen.

More than that a public outrage was absolutely historic and media chewed it as if they had no food to eat for a long time.

” We Australians won’t accept dishonesty and entire nation whether cricket lovers or not is angry and feeling let down, as in our country honesty has big place not only in our hearts but also our brains as well” Every Australian who met me on the streets of every town I visited as a tourist during that period had told me .

Guys have gone through all this and worked harder psychologically and physically to make a comeback and play a competitive cricket. Mind well, Australia suffered huge losses ( including a series against India) during the year of ban on these two superstars.

Can you imagine India without Kohli and Bumrah leave alone for a year even for an important tournament or series?

If anyone of you (I am asking the booing brigade  in audience ) had played even a club level cricket would understand how much it takes to score even a thirty-forty or take two- three wickets or even a simple high catch against the weekend only cricketing sides.

These guys( Smith and co) have made a tremendous comeback scoring important knocks in World cup and who is the better person to understand the pain these two have gone through, more than our Vir.

Whatever! Even while accepting that cricket is a ruthless game and big celebrity cricketers must face it , I have a feeling , digging the old graves would not do a good to cricket and Virat has rightly objected and forcefully requested the heartless creatures who may be only a few fun crazy ones in the stands ( I must say majority are genuine sports lovers) to respect the performance and not make loose insulting and wound opening jibes.

Virat we salute you more for your gesture than your usual world class batsmanship of 80 odd knock you played yesterday. It was very important that such ‘I have paid my money and brought tickets , I have right to say anything and shout whatever I want to, from a distance ‘ type of attitude had to be halted before it becomes a ritual.

Will all big stars current or retired do a Virat  ? is a million dollar question !

Visit www.sportsnasha.com for an intense  stuff