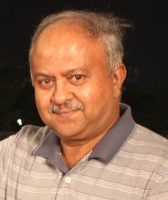 Watching 1983 World Cup final at Lords has been The Most Memorable Day of my life!!
India defended 183 runs against the mighty West Indies to win the World Cup. It was sensational !!
Each player of the Indian Team contributed in that win, however the 38 runs scored by Srikant & 26 invaluable runs by Mohinder Amarnath batting at No 3 were key performances. Wonder what would have happened if Mohinder had not batted those crucial 90 minutes on a fresh lively pitch, after losing Gavaskar early.
Medium pacers like Madanlal, Rodger Binny, Sandhu & Mohinder proved extremely effective as the ball swung enough to beat the West Indian Batsmen. It was India’s good fortune that Kapil Dev was fielding at Mid wicket who could reach easily, running backwards, to catch dangerous Viv Richards, which turned the match. Kapil lead from the front & played that life time innings of 175 against Zimbabwe after India was struggling at 17 for 5. It is important to accept that all-rounders like Kapil Dev are born once in a century.
I also had the opportunity to witness India/Pakistan match at Manchester & India/Australia match at the Oval, in 1999 World Cup.
Playing World Cup in England is different than playing in sub continent or in Australia. Pitches in England are not so friendly for stroke play barring some exceptions like Oval, etc. As the changing weather conditions make considerable impact on the game, one has to graft for runs & more often play the session without losing more wickets. 240 is a defendable score on most pitches in England unlike 300 in India.
Selection would be easier if these things are accepted.
It will be important to get a solid start of 60/70 runs in 15 overs which can be then used to add 100/120 runs in the next 25 overs. Last 10 overs with 5/6 wickets in hand & about 190 runs on board any team would feel comfortable.
Thus, Rohit Sharma, Mayank Agarwal, Pujara, Virat Kohli, Hanuma Vihari, Dhoni, Jadeja, Bhuvaneswar Kumar, Chahal, Bumra, Shami would make a balanced side.
Kedar Jadhav, Dhavan, Vijay Shankar & Pant on the bench.
It will be important for the players to get into the form in time & peak at the appropriate time.
Game of Chess is won by making use of all the Pawns & not just by the Queen alone.
Let us wish, Indian Cricket Team repeats history in 2019 at Lords !!

Writer is Former Maharashtra Ranji Captain and a classy batsman