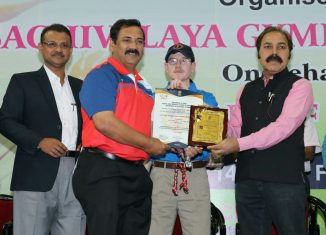 Recently the All India Civil Service Badminton Tournament 2018-19 was held at Balewadi, Pune during 14th to 20th Feb. 2019. In the above Tournament, Central Civil Services Cultural and Sports Board, New Delhi had decided to facilitated sports person who have dedicated and participated continuously and excelled in the above Tournaments as well as in the other tournament also. Above Board for this purpose have Awarded them with the “LIFE TIME ACHIEVEMENT APPRECIATION AWARD” Certificate and Momento.
Shri Milind Raghunath Purnapatre has received the above Award during the Prize Distribution Ceremony held on 20/02/2019 at Balewadi Stadium, Pune. Milind has participated in the above said Tournament since 1991 to 2019. He will be retiring from Income Tax Department, Mumbai as a Income Tax Inspector in December 2019. He is originally from Chaligaon, Dist. Jalgaon. He started his Badminton career under the guidance of Late Shri Bahunkaka Sonawane, Late Dr. Subhash Purnapatre and Principal D.V. Chitte Sir, since 1973. He was sincere worker in those days and that is a reason he could represen A.B. Highschool, Chalisgaon, in Maharashtra, inter-district inter-divisional Badminton Tournament held at Latur in 1974-75 and was runners up in Team Championship. He also won Jalgaon District Badminton Championship in 1980 and represented Jalgaon District continuously ten years (from 1975-1985) in Inter District Badminton Championship in Junior and Mens also. He was also represented Pune University Badminton Team in 1977-78 at Jabalpur (M.P.) and was the first player from Jalgaon and Dhule District to be selected. Then 1980 he was selected as a Captain of Pune University Badminton Team and which was runners-up in the All India Inter Zonal Inter University Badminton Championship held at Gorakhpur (U.P.).
In 1980 he got job in Income Tax Department, Mumbai under Sport Quota. Since 1980 till date he has continuously represented Income Tax Department in Revenue Tournament, All India Civil Services Tournament and many other open Tournament including Master National Badminton Championship (10 years continuously). He has also represented India in 55+ Doubles category in the World Master Badminton Championship which was held at Sweden in the year 2015. He was awarded with, “Shivratna Puraskar 2013”, “Khel Seva Award-2016”, “Life Time Achievement Appreciation Award” in 2019, for his continuous good performance and dedication in the Badminton. He was also awarded many times at various functions.
In his long Badminton Career i.e. more than 45 years, previously he has played with Milind Ghate and Vivek Joshi from Chalisgaon as a partner and since last 25 years till date he has played with Benhur Solomon, Suptd. GST who was captain of Mumbai University Badminton Team and was Winner and Runners up in Single and Double in many tournaments.
Milind has given credit of his success goes to his Coaches, Late parents, Wife Supriya and all other family members.