Skip to content
You are here
Home > Cricket > Why Pujara can be the ideal no.3 Batsman for India in ODI’s 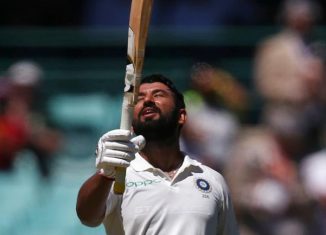 We all associate Rolly Royce with royalty, opulence and luxury, don’t we? Well it’s not wrong either, the car does evoke royalty and sophistication but do we ever associate Rolls Royce to compete with a sportscar? 9 out of 10 people would say No! Because it is the image of the car which has been developed since decades that the car is only meant for luxury. But in reality, the Rolls Royce is also one of the most powerful cars in the world with a V12 Cylinder engine and more than 800 horsepower. That amount of power can even put Lamborghini and Ferrari which are 500 and 600 Bhp cars to the test on a flat race circuit. But because of the image and the overall build of the car, we never associate it with the fact that it can even give a tough competition on the racing circuit.

Well many of you may be wondering why is a discussion on car being carried out but the thing is Cheteshwar Pujara is also one player who is going through a similar conundrum as the Rolls vehicle. The Wall 2.0 as he is fondly called now has a massive test record, has scored test centuries in England, South Africa and Australia which are the most hostile tracks to score runs on. Averages 50+ in Test and even in the ongoing series he has piled up 521 runs facing 300+ balls thrice in the series. The 2nd highest scorer in the series is Pant with 350 runs and Kohli far away with 282 runs.

Pujara has been rock solid in defence, is dependable like a war tank and is silently playing one format with speciality since years now. But he question is why? Why is he not given more chances in ODIs’? If he can’t get any more chances, then how do you justify Dravid’s ODI Career which lasted for more than 17 years and 350+ ODI’s. Even he had a strike rate of a classical 70.00 in ODI’s but he went on to become one of the most solid ODI batsman helping India win in numerous occasions in a span of 2 decades.

Even Michael Vaughn who was England’s skipper and one of the classiest batsmen in Tests given 70+ ODI’s to prove himself despite averaging only 27.00!

And the 2nd point is, in the 50 over format, you need someone at no.3 or 4 who can bat out the middle sessions. The phase between 15 to 35 overs, you need someone like Dravid or a Pujara who can stick to the crease, rotate the strike and keep the scoreboard ticking. The no.3 or 4 batsman is not a slogger who needs to have a strike rate of 100+ and entertain crowd with sixes. The no.3/4 batsman has to be an anchor, who silently steadies the ship so that the middle order and lower middle order can play freely in the last 15 overs. Pujara has all those abilities to be the ideal no.3 batsman but still he has been given only 5 ODI’s to play in his career of almost 7 years, isn’t that unfair?

Rohit Sharma, Yuvraj Singh, Mohamad Kaif, Suresh Raina, Robin Singh, Virender Sehwag, Vinod Kambli, Dinesh Mongia and many more names averaged only between 28.00 to 31.00 in their first 80 to 85 ODI’s but still because of the numerous opportunities and faith put on them, many names from this list went on to become one of the most successful ODI Batsman for India. Then why not Pujara? Why can’t we given him atleast 35 to 40 ODI’s before judging him that he is not fit for ODI’s. How can we decide a fate of a prolific test cricketer in a matter of just 5 ODI’s?

In fact in all its practicality, Pujara was the most ideal replacement of Dravid in ODI’s , he could have brought that much needed stability, anchorship and relief at the no.3 or 4 position and anyday a better option than Kedar Jadhav, Raina, KL Rahul or Ajinkya Rahane!

Let’s hope Pujara gets one more shot at ODI’s as we still believe he can be the one who has all the qualities to lend that much needed stability into the ODI team.

4 thoughts on “Why Pujara can be the ideal no.3 Batsman for India in ODI’s”