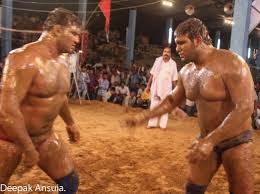 Things have heated up towards the end of the second week in Maharashtra Kusti League at Pune’s Balewadi Stadium. Neck to neck competitions are on. Mumbai Shasta and Vidarbhache Weigh played a tie with each team’s winning three bouts each. Kumar Shelar, Vijay Patil, Sonaba Gongane from Vidarbhache Wagh and  Rajendra Sool, Lalita Sherawat, Atul Patil from Mumbai Shastra were the winners from their respective bouts. While even the second match was a tie between Puneri Ustad and Veer Marathwada with both winning three bouts. Saurabh Patil, Vinod Kumar, Vijay Chaudhary from Puneri Ustad and Shubham Thor at, Swazi Shinede, Datta Narale from Veer Marathwada were the winners form their respetive bouts. Eventually, the bout between Vishranti Patil and Swati Shinde was awarded as the Fantastic Fight of the day . The final will be played on Sunday.

Players like Rahul Aaware, Utkarsh Kale, Lalita Sherawat, Vinod Kumar, Vijay Chaudhary are the unbeaten heroes so far at the League. Amongst these, Lalita Sherawat, Vinod Kumar, Vijay Chaudhary won their consecutive eighth bout. Yashwant Satara are still unbeaten in the League after nine matches and lead the table with 16 match points.