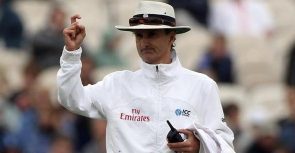 When we talk or write about cricket, it’s always about those fours, sixes or wickets. It’s about the players who are stars in their own right. Little do we notice that there is one more breed of cricket who has been silently contributing the game since the time of its inception. Yes, we are talking about the umpires- An empire who is a symbol of justice, whose words mean everything on the field and whose commands are equivalent to cricketers what a judge does in the court of law. An umpire who relentlessly stands all the 100 overs of a match in a deadstill position, toils for 5 days unbiased, has to be always on toes, alert and prompt. Rarely do we come across an article written on umpires despite their yeoman contribution to the game. Hence we bring up a list of 10 prolific umpires who will always be remembered for their outstanding contribution to the game.

One of the most eccentric umpires in the history of cricket, the man with a crooked finger ruled the International cricket for a span of almost over 18 years. Billy was one of the most entertaining, jolly and expressive umpires unlike the normal breed of umpires who stay calm on the field. His crooked finger became world famous and that was something batsman would never like to see! From signaling fours and sixes in the most expressive and funny way to giving some really close decisions, he is no doubt a stalwart in the field of International umpiring officiating in over 200 ODI’s and 84 Tests. Billy was in the list of ICC Elite Umpires for a span of 10 years and he even achieved the record of being the youngest umpire to officiate in 100 ODI’s which was later broke by Simon Taufel.

One of the most experienced empires of cricket, Steve Bucknor was all grace, charm and poise on the field mixed with that carribean touch he brought to the game. He officiated in his 1st test match in 1989 and went on to stand in over 128 Test Matches and 181 ODI’s. He was given the Order of Jamaica, Commander Class, in the area of sports” for “superb services to sport with a career spanning almost 20 years.

Aleem Dar at best can be described as the Sachin Tendulkar of Umpiring. One of the most respected umpire in cricket. Spotless records, accurate decisions, successful with a career spanning over 18 years, member of the ICC elite empires since  2002 and most capped umpire too with 119 Tests and 190 ODI’s and 43 T20’s. Aleem Dar has stood in some of the most important games in cricket history. Dar was the umpire in the 2007 World Cup final and also in the 2010 World Twenty20 final. He also stood in some of the matches at the 2015 World Cup.

Dar has also won the ICC Umpire of the Year on three consecutive occasions in 2009, 2010, and 2011. The 50-year-old is still active as an umpire and soon could become the most capped international umpire in International Cricket. Aleem who has been clean shaven all his career now sports a beard because Hashim Amla suggested him to keep one representing their community Islam and showing that their community also has talented people in various fields.

A member of the original elite empire panel which was set up in 2002, the 67 yr old Harper made his first appearance in 1994 while his test match debut was in 1998. Daryl officiated in 95 Tests and 174 ODI’s while he was also the umpire in semi-final game at the 2003 World Cup. Harper though was criticized by Indians when they toured Windies, he was still rated as one of the best umpires by many in International cricket.

Kumar Dharmasena is the only umpire who has also played as a cricketer in World Cup and has alos officiated as an empire in World Cup. The former Sri Lankan cricketer was a prolific all-rounder with over 2000 Runs and 200+ wickets in International cricket. He also played a key role for Sri Lanka in the 1996 world cup and now he is one of the most active umpires at present in International cricket. He made his debut as an empire in 2009 and there has been no looking back after that. Kumar was also included in the list of 18 Umpires selected for the 2011 World Cup. In the same year, he was also promoted in the elite list of ICC umpires too making him amongst the most prolific active umpires in cricket.

He was the kind of umpires just like how you would be afraid of a certain professor in your school times who would always be strict & disciplined. Rudi Kortzen was one of the most serious, non-expressive and solid umpires we have got to see. He was also nick named the “slow death” for his trademark style of raising the finger to adjudge the batsman out in a very slow manner. Koertzen was the umpire in ICC Champions Trophy in 2004 and 2006 while he was also the umpire in two World Cup Semi finals. Rudi started his career in 1992 while he was a part of the elite ICC empires between 2002 to 2010. He retired in 2010 at Harare in the Sri Lanka-Zimbabwe match with a career spanning 105 Tests and 209 ODI’s. Koertzen has also received ICC Golden Bails Award for umpiring in 100 Tests and Silver Bails Awards for standing in 200 ODIs.

One of the most handsome and elegant umpires in International cricket, Simon stands at the 4th place in the list of best umpires of all time. His consistency and accurate decisions have been unmatched and so is his discipline and grace on the field. A promising medium pace bowler himself in Australia’s county cricket, his career was cut short after a horrific back injury. But that did not stop him from leaving the sport of cricket as he made his umpiring ODI debut in 1999 and Test Debut in 2000. Since then he has officiated in 74 Tests, 174 ODI’s and 34 T20’s. Simon retired in 2012 after ICC T20 World Cup and since then took on the role of ICC Umpire performance and training manager.

A first class cricketer who played 14 years for Gloucestshire as a middle order batsman. David is one of the finest contributors to the game of cricket. He also made the ritual of one leg lifting famous everytime a team reached a score of 111. Though others had done it before him, but he brought the superstitious lifting of one leg off the floor to the international stage and the act is now most closely associated with him. Every time a team would reach a score of 111 exactly or multiples of that number, he would lift his leg and often start hopping to maintain the position until the batting team managed to score again. It is often this superstitious act that many remember umpire Shepherd for and not to forget the crowd absolutely loved it! The score of 111 would be known as a ‘Nelson’, 222 a ‘double Nelson’ and so on.

David famous for his round glasses and bubbly nature made his Umpiring debut in 1985 and since then officiated in 92 Tests and 174 ODI’s which also includes officiating in 3 World Cup Finals.

Darell Hair officiated in 78 Tests, 139 ODI’s and 6T20’s and he is renowned for no balling world’s greatest spinner Muttiah Muralitharan 7 times in his 3 overs for throwing the ball in the 1995 Adelaite test between Sri Lanka and Australia. Hair was also a part of the controversial test match in 2006 at Oval between Pakistan and England where he and his colleague umpire Billy Doctrove ruled Pakistan of Ball Tampering. He was a part of the two umpires who awarded a new replacement ball and 5 penalty runs to England to which Pakistan team protested by not coming to the field after tea break. In a controversial career, ICC later came up with a decision that Darell Hair should not be officiating in the test playing nations. He eventually retired in 2008 handing over his resignation to take up the coaching role.