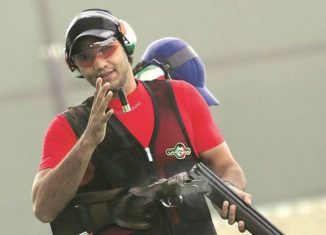 Hyderabad’s trap shooter Kynan Chennai displayed a solid grit to win his first gold in the senior category at the 62nd National Championship in Jaipur on Thursday.

Kynan, representing Telangana, shot 43 out of 50 to pip Jakarta Asian Games silver-medallist Lakshay Sheoran from Haryana, who managed 42. Tamil Nadu’s Prithviraj Tondaiman, who had topped the qualification round with a 124 out 125, took bronze (33). “It’s a great feeling for me to get fruits after a lot of hard work. Winning a gold medal is always the best one. Previously, I had bronze in the senior division, golds in the juniors but this one (gold) in the senior division is best for me,” cheap told this paper.

In a strong men’s trap field, which had the likes of former world champion Manavjit Singh Sandhu among others, Kynan began the day in the seventh position. He obliged with a 24 out of 25 for a tall of 118 placing him fourth in the standings.

“Sometimes in the competition, it takes time to shift gears. You get feel little uneasy and that’s how I felt (starting from the seventh spot.) I realized it’s time to push harder and focus a little more, “the Hyderabad shooter added.
Meanwhile, in the junior men’s trap, however, Lakshay won gold with a finals score of 47 while Manavaditya Singh Rathore had silver for Rajasthan with 39.