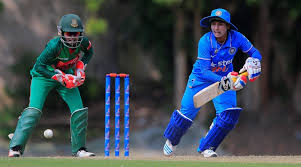 Veteran opener Mithali Raj scored a hundred to fashion India A’s 28-run win over Australia A in the second match of three-match T20 series at the BKC ground here on Wednesday. With this victory, the ghosts also clinched the series having won the first game by four wickets.

After electing to bat, India A were reduced to 66 for 4 in the 9th over before Mithali found an able ally in skipper Harmanpreet Kaur and the duo together turned the match on its head with a rollicking 85-run stand in only 51 balls. Harmanpreet perished having made 57 off 32 balls.
Michalis unbeaten 105 came in 61 balls and recorded the highest score by an Indian woman in T20 bettering Smriti Mandhana’s score of 102.

Australia A started well with Tahlia McGrath (47,29b) and Josephine Dooley adding 61 in first seven overs before McGrath was stumped by Taniya Bhatia off Poonam Yadav.
With her dismissal, Australian innings lost its steam as wickets fell at regular interval for the visitors. In the end, they could muster only 156/9. Yadav, Anuja Patil, and Deepti Sharma claimed two wickets apiece for the hosts.