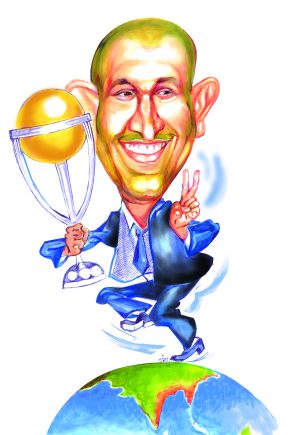 It was an extremely hot day at Sharjah. The Aussies had put forth a massive target in front of India. All hopes lied on one man as usual. He didn’t disappoint. A herculean task was completed. The great man single-handedly stitched together 134 of the most beautiful runs and the dessert storm had hit the Australians both literally and figuratively. At one point he was an artist, at another, he was a butcher. Since then, numerous batsmen have made 150s. However that innings remains etched in everyone’s memories as one of the finest if not the finest ODI innings ever played. Why then, is that innings a hallmark of greatness and other innings played in the modern era pale in comparison?

Well for starters today’s ODI cricket is nowhere like it was in the 90s. It seems like a mere extension of t20 cricket. It’s like 2 T20 games being played on the same day. So then, why would one invest so much time in ODI cricket when they can watch an exciting game unfold in just 3 hours? There are no passages of play. Just pure unadulterated hitting followed by some more hitting and to end it some innovative hitting. This is not because the batsmen have suddenly found their mojo or anything. Those big trees (also known as bats in some parts of the world), two new balls (killers of reverse swing) and roads (also known as pitches in some parts of the world) are the criminals in this case. Funnily enough, the only thing constant in about 140 years of cricket is the cricket ball. All other things have changed. Smaller grounds make matters even worse. It’s like a boxing contest today, except that it’s not between bat and ball. It’s between two independent boxers (batsmen) punching a ham-less object (bowlers).The competition is about who can hit it the hardest.

The ongoing Asia cup is a huge indication of how a great contest between bat and ball can result in the most exciting of games. The turnouts in these games have been heartening. The level of interest in the tournament is soaring. The real essence of ODI cricket, after-all , is not merely fours and sixes. It’s also about the ability of a batsman to nudge the ball in the gap, play with the field and if need be, see off good spells without getting finicky about the run rate. It’s time then that ICC takes note of this and brings back all the old rules to make games more exciting. It’s time they realize that Bhumrah’s reverse swinging Yorkers and ABD’s squash-buckling shots are going to bring about similar levels of excitement.