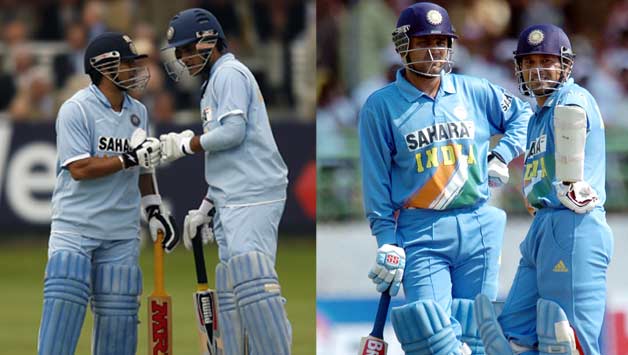 There have been some pairs who have simply amazed us in cricket. Saurav and Sachin redefined ODI cricket with their opening stands. They introduced a new era for India where the batsman would not give up, would not fear the best bowling attacks. Sachin and Ganguly are the best opening pair in the history of ODI’s with 6609runs scoring together as openers. They played at a time when the cricket witnessed some of the best bowlers right from the West Indies greats like Courtney Walsh and Curtley Ambrose to Pakistani legends like Akram, Waqar Younis and Shoaib Akhtar. Australia had that time the most dreaded bowling attack with Gillespie, Shane Warne,Brett Lee, Mcgrath, Kasprovich, Andy Bichel and Macgill in their arsenal. New Zealand at that time had Shane Bond and Vettori at their peak. Sri Lanka had the likes of Chaminda Vaas and Muralitharan troubling the batsman all over. It was during that time against such bowlers where the rules were also not as easy for batsman as today, Ganguly and Tendulkar attacked the opposition teams with confidence. No one can replace these legends while the same applies to Sehwag and Gambhir too who are at present the second best opening pair in ODI’s. Sehwag also opened alot with Tendulkar and Ganguly making him one of best openers in Indian cricket.

Apart from them, it was always Gilchrist and Hayden-two of the most devastating batsman of that time leading the charts and they are still at no.2 with 5372runs.  Gilchrist who was a maniac at the top of the order while the big bully Hayden had the power which could make any newcomer bowler go into depression. The late 90’s and early 2000’s also witnessed a few more interesting pairs like Jayasuriya and Attapatu which was a combination of fire and ice. SA also had no worries for almost 7years from 2002 to 2009 with Gibbs and Smith taking the openers slot with quite some success.

Hence lets take a look at some of the best opening pairs in ODI Cricket.