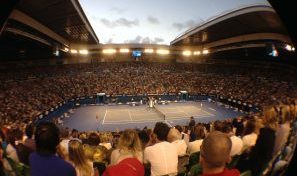 The most prestigious of the four Grand Slams,Wimbledon gets underway on Monday.The most interesting aspect this year is that for the first time in almost a year all top players excluding only Andy Murray are participating.World number one Nadal has played in all four past slams while Federer skipped clay court season to prepare for Wimbledon.Djokovic out of action for 10 months  will be playing his second Grand Slam after French Open.

Draw has pitted Nadal,Djokovic and Juan Martin Del Potro in the bottom half.However Djokovic has tough passage untill semis.Djokovic may meet 22nd seed Kyle Edmond of Britain in the third round.Dominic Thiem and Alexander Zverev young guns who have not gone past fourth round at SW 19 will also have tough task of making any further this year as Djokovic may meet Thiem while controversial Aussie Nick Kyrgios is in Zverev’s path.On the other hand Rafael Nadal fresh from his 11th French Open title has kindest of draw.Although Nadal has not reached quarterfinals at Wimbledon since 2011,two time champion can overcome players like Dudi Sela,Vasek Pospisil,Mischa Zverev and Fabio Fognini.Del Potro who lost to Nadal in French Open semis may meet Spaniard in the quarterfinals.
In the top half 8 times winner Roger Federer will have some big servers in  his draw.Ivo Karlovic in the third round while Borna Coric who beat Federer in Halle final last week is a fourth round opponent for Federer.Sam Quarry,Kevin Anderson and Richard Gasquet are some of the dangerous players in Swiss half’ s draw.Third seed Marin Cilic who saved a match point to beat Djokovic to lift Queen’s title last week also like Nadal has a good draw.Milos Raonic,John Isner and Grigor Dimitrov are tricky players in his draw.However one can expect last year’s finallist to reach the last four.
Stan Wawrinka vs Grigor Dimitrov and Richard Gasquet vs Gael Monfils are the key first round matchups to look forward to.
Since 2002 no player has won Wimbledon apart from Big Four.While Federer and Nadal both over 30 still contested last six Grand Slam finals it will be a treat for tennis fans if they reach another one in a fortnight.Federer has won 20 majors while Nadal has 17.Federer will be under more pressure as he has to defend more ATP points regard to his title run last year.Nadal on the other hand lost in fourth round last year and will be hungry to win his third Wimbledon title.If it happens he will do French Open-Wimbledon double for the third time in his career.
Shailesh Padhye