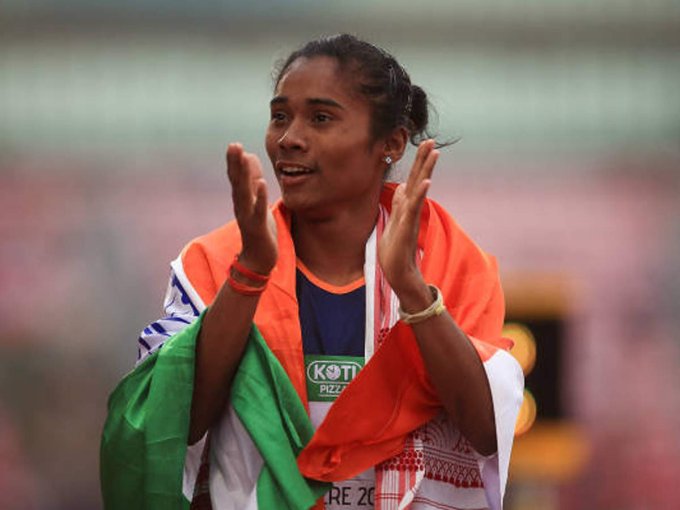 Hima Das made the headlines in all newspapers the past few days with her gold medal winning feat at under 20 World Athletics Championships.18 year old Indian won gold in 400meters at Tampere,Finland with 51.46s.Here is a look at her journey from a village in Assam to glory in Tempere.

Born in Kandlumari village in Nagaon,Hima hails from a poor background.Her father is a farmer while mother a housewife.She is accompanied by 3 younger sisters and a brother.She is too stubborn as told by his nephew Joy Das. She used to play football along with boys in her village despite reluctance by her family members.With her speed,
Nipon Das, athletics coach in her school tempted her to opt for sprinting.She shifted her base to 150km away to Guwahati for training.Firstly she ran in 100 and 200 meters.However she was slow initially and finished these races strongly which prompted her coach to start her in 400metres.
After winning gold in Federation Cup in March, she finished creditable sixth at Commonwealth Games with 51.32s in Gold Coast.This performance gave her confidence that she can achieve big at the global stage. At Tampere,she was dominant in heats as well as semifinals finishing the races at the top. In the 400m final she was trailing at the start only to recover at the end to win the gold.This is her strong point as the likes of P T Usha and Milkha Singh lost out on medals for India in Olympics by a whisker.
The accolades are coming from all over the country as she became the first ever Indian to win a track medal at world event.The only blemish came on the part of official from Athletics Federation of India who commented on her weak English speaking after her semifinal win.It was relief for her as they apologised later.
Now Hima Das has been included in TOPS scheme which will give her much needed financial boost as she embarks on future events. Her next assignment is Asian Games in Jakarta.Let us give her best wishes.
Shailesh Padhye
TEAM SPORTSNASHA