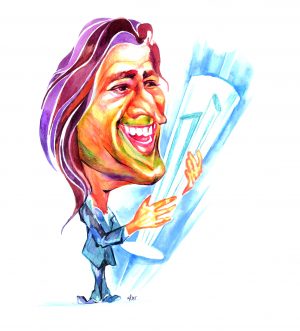 He doesn’t know if the cricketer in him is any different since fatherhood but Mahendra singh Dhoni says daughter Ziva has certainly changed the person that he is, especially in his attempts to keep her on the “beckfoot”

The 37-year-old talismanic former India skipper, who is basking in the glory of leading Chennai super Kings to the IPL title earlier this year, spoke on the rarely tou of the time ched subject of his life after fatherhood in a TV show. “I don’t know whether it has changed me as a cricketer, as a person yes of course because daughters are very close to  their fathers, “Dhoni said .

“In my  case the oroblem is when she (Ziva) was born I was not there (three years ago), most of the time I was playing cricket, so everything bad somehow is thrown at me (to deeal with),” he added.

“Khana nahi kha rahi hai, papa aa jayenge khana khao (when she is not eating foot, she is told dad will come have food), is she is doing something  wrong, papa aa jaeynge mat karo. so, in a way she looks at me and she is slightly on the back-foot,”Dhoni said.

Ziva was constant during this IPL, accompanying Dhoni to a lot of matches and being a part of his post  game clebrations.

“I had a wonderful time with her (Ziva), she was there for the whole of IPL and one of her biggest requests used to be I have to go to the ground, that is lawn for her. And also  there are lot of kids in the team.

“I don’t know how much she follows cricket, how much she understands, but I have to bring her one day for the post match prestantation and she (can) just start answering all the  questions,” he quipped.