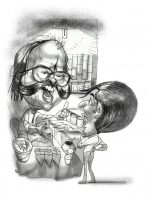 Me- Mamu You please tell what is the  reason of this big bandage on your head?

Mamu- Aju bhai I was playing a match after long time?

Mamu- I was asked to open the innings?

Mamu- The wicket was grassy and bouncy.

Me- So what. We used to play on matting wickets. And ball used to rise from good length like the one is rising in current Ashes Series. But tell me what happened to you.

Mamu- The new ball  was very hard and shining.

Me – New ball is always like that. Hard and shining.

Mamu-Aju bhai in addition to that bowler name was Steyn.

Me- So what? Name does not make the ball bounce.

Mamu- Not only that I had no concentration as I had not slept last night.

Me – So what. Virat also does not sleep whole night and plays great innings with full concentration. And as such now he is married , he won’t get a minute sleep also.

Mamu-  It’s not just that. Bowler was erratic and bowling short pitch stuff scaring me all the time.

Me- Do you expect fast bowlers to bowl lolypops?.

Mamu- That’s fine with me but I had to survive those blows on my hand neck shoulder arms and everywhere.

Me-So many Indians have taken that on body. From Gavaskar to  Sachin everyone gets those gifts . Nothing new in that Mamu. All is fair in love war and cricket.

Mamu- Aju bhai what nonsense ! Do you want me to die on the cricket ground?

Me-Mamu why you will die? Helmet is there no to protect.

Mamu-  That is what I am screaming?

Me- What? You did not have helmet?

Mamu- Aju bhai , I had but not cricket helmet.

Me-  Then you wearing skull cap like sunny or that Hat like Jimmy Amarnath which fell on wicket when he tried to hook.

Mamu- Helmet was there but it was scooter helmet that too not with ISI mark.

Me- So what everyone wears non ISI helmet on scooter.

Mamu-On scooter its ok but not on grassy wicket.

Me-May be Mamu. But why you were not wearing proper cricketing helmet?

Mamu-What say Aju Bhai. I had gone for shopping a nice branded helmet for my match.

Me- Then what stopped you? Could you not afford it?

Mamu-I had taken lot of cash with me and in addition credit card also.

Me- Then why you did not buy. After all, your head though most of it empty, is important Mamu.

Mamu- All the shops selling cricket helmets had one board outside. OUT OF STOCK!

Me- Why because of GST?