During my weekly visit to Pan shop yesterday, I had some interesting cricketing debate with Mamu Panwala. It made my tobacco less Poona Masala Pan taste like Banarasi masala . It went somewhat like this.

Me- Sensational news . Did you read?

Mamu- No. I got up late today. Could not read newspaper Aju Bhai. Please tell what’s that?

Me- Virendra Sehwag ,  Nawab of Najafgarh and Sultan of Multan won’t play underhand (underarm) cricket in his Bungalow.

Mamu- How can I guess?

Mamu- Is it because Viru can’t bowl under hand?

Me-  No. Yar. Viru can bowl under hand over hand left hand right hand. Moreover he can bowl side hand also if he joins Malinga training academy. Tell me why Viru can’t play underhand match in his backyard.

Mamu- Is it because Viru is a big player and does not want to play such low form of game?

Mamu- Is it because the open space in his bungalow is not covered and if anybody hits ball out of compound he can’t retrieve..

Me- Not at all! He has so many servants who can go and get the ball. Also he can keep many balls and  he can replace them if one is hit out of ground.

Me- No. That is not treason.He is not afraid of Trevor nor Greg Chappel..In fact, he was the only one who stood up and spoke when Greg Chappel was coach and bullying poor simple boys of Indian team. Please scratch your brain you can get the answer why Viru won’t play underarm cricket in his backyard

Mamu- Then is it because Viru is worried that if he hits ball it would break window panes in his bungalow which may not be insured.

Me-  No way. That is not the reason. Viru is not worried about spending money. He is big hearted . We can easily guess how broad minded he is when he talks on TV so freely.

Mamu- Then is it because he does not want his son to play underarm cricket and spoil his career.

Mamu- Then is it because Viru does not like playing underarm because there is no money.

Me-  No Mamu. Viru is not bothered about money like many other cricketers are. He is not money minded but funny minded. Just guess.

Mamu- Aju Bhai just for few seconds move aside,  I want to see the boys playing cricket on road I watch them every Sunday and enjoy making pan. That is my amusement.

Me- Mamu please tell me why these boys play on road and not in their huge building complex?

Mamu- Simple! Every one owns big cars like BMW, Merc  and they are parked in open space Aju Bhai. How can children play like we used to play in our grand era of eighties and nineties?

Me-  You said it Mamu, you have given the answer of my awkwardly challenging question.

Mamu-  Really? How is that?

Me – Very easy Mamu! Master Blaster Sachin has gifted BMW to Viru. So Viru has to park it in his huge Bungalow. How can Viru afford to play in open space meant to be play area of the speawling bungalow.

Me-  Why sorry Mamu? . Blaster Master Viru is proud owner of BMW,  that too gifted by Master blaster SRT. Are you not happy?

Mamu- Not as much Aju Bhai. I want Nawab’s I mean Viru’s kids play cricket more than sit in BMW roam around and play  virtual games on mobile.

Me- You saved my one million Mamu. I was about to tell Sachin to gift you also latest model of BMW.

Mamu-  For what? I am not Viru, that Sachin will give me BMW.

Me- You may not be Viru  of Cricket Mamu but definitely Bachhan of cricket.

Me- I mean Bol Bachhan of Cricket. 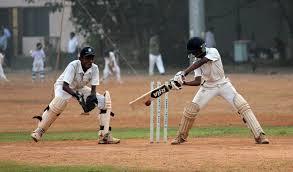