Well enough has been said and covered about the male cricket stars. They get a overdose of coverage as well as fame, name and money as compared to their female counterparts who work equally hard and play at the same level as this boys. Hence, it is important to recognize as well as know that there are talented women cricketers and hence we at sportsnasha brought out a list of top 5 women cricketers in the world who have gone unnoticed as compared to their male counterparts.

The Australian skipper averages as good as Kohli, Dhoni, De Villiers and Steve smith in ODI’s and has already smashed 11 tons in mere 63ODI’s at the age of 25 which is a record even better than Kohli, de villiers and Smith when they were at that stage. She hits the ball sweetly which can give even the male cricketers a complex but such is the irony not everyone knows her around the world!

Sarah taylor has been the backbone of the England Cricket Team with a healthy average of 40+ and has rescued his teams numerous times out of trouble. Sarah is also regarded as one of the most naturally talented and gifted players England has ever produced as she posseses the ability to change the game single handedly on her day.

Over 6000 ODI runs, Mithali Raj is the highest Indian run getter, batting average of 51.68, 49fifties and 6 hundreds at an average of  50+ makes her right in the league of Kohli, De Villiers, smith and Dhoni. The Indian skipper has definately been one of the all time ODI greats but hardly has she been noticed. 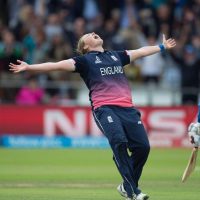 The 25yr old pacer is known for her lethal and deadly in swingers and she is definately on her way to achieve greatness in ODI’s. She has got one of the best bowling averages while she has been a genuine wicket taker for England since the last few years.

Well she is currently all the rage in the cricketing circles. To an extent, she is the Kohli of Australia. Averaging 51 in ODI’s, Ellyse scores runs like a run machine, she is smart and sexy and has a charismatic presence on the field plus she is an excellent fielder. What’s more she also bowls medium pacers and chips in with important breakthroughs. If her stats are anything to go by, she is already one of the best women all rounders in Cricket and it wont be an over statement to say that she can become the next Kallis for Australia!