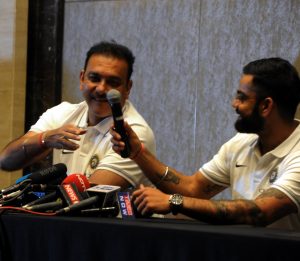 During my weekly visit to Pan shop yesterday, I had some interesting cricketing debate with Mamu Panwala. It made my tobacco less Poona Masala Pan taste like Banarasi masala . It went some what like this….

Me– How are you Mama? Wats news on cricket front?

Me- I Know after Shastri took over, immediately  Virat Scored scintillating hundred .

Mamu- What a motivational coach Ravi Shastri is!

Me– These coaches are big psychologists Mama.

Mamu– What do you mean by psychologists? Please explain me, if you can, Aju Bhai.

Me– I will tell you a story. First make me a nice Pan.

Mamu– Take it . One pan free per story.

Me– Australia v/s West Indies Test match was going on. As you know both teams were arch rivals having fearsome fast bowlers like Thomson, Lillee, Holding and batsmen like Lloyd, Kalicharan, Richards, Chappell Brothers etc.

Me – Australia set target of 350 odd runs for West Indies to win in fourth innings. West Indies were chasing the target easily with some two hundred plus runs with just one wicket down. Seeing West Indies cruise , Ian Chappell  captain of Aussies got furious.

Mamu– What happened next Aju Bhai?

Me – He called Lille and Thomo for practice after end of 4th day and started abusing them loudly in front of all the team member ‘ You bas****, fu****, di** h*** and what not Mama , meaning of which you won’t  understand  without having a slang dictionary app on your mobile.

Mamu– I am pan shop owner Aju Bhai. I understand all galis, slangs, flangs,  zangs  from all languages by heart . Any way, what happened next in the match is what I am waiting to know?

Me– Next day it all turned around and Aussie Pacers bowled lethal bouncy spells to blow away the giant West Indies who suddenly batted like current Sri Lankans and  before lunch  match was over. Lillee, Thommo and company had great evening  with Clive Lloyd and company nursing wounds in their hotel rooms while Australians having a ball enjoying cocktails.

Mamu– Oh! Now I understood what is psychology. But how Virat was motivated  by Ravi Shastri would be important to know Aju Bhai.

Me– It’s purely authentically secret story as sensational as Panama leaks. It was broken by a website hosted in remote islands of All Fekana .

Mamu– Please tell me I want to know and tell everybody before it is shared on facebook by my all remotely and remorsefully  loving friends.

Me– Ravi must have rubbed Virat on the wrong side  or made him red , infuriated him with something!

Mamu– Did Ravi fire him like Ian Chappell blasted his famous bowling duo of Thommo and Lillee?

Me– No Mama! That is the old tactic.

Mamu– What is his new strategy?

Me–  Simple. He played a master stroke. He just showed Virat trailer of latest  Anushka Movie.

Mamu– Are you saying it was  trailer of ‘Harry meets Sejal?’

Me– You said it Mama.  As per the breaking news of that website ‘Harry meets Sejal made  Virat crazy and Pagal.’ I mean wild enough to crush sweet and innocent Lankans.

Mamu– Ravi is real master of psychology. Now I understood on every release of Anushka with unbearably  romantic encounters with her hero , why we see a swashbuckling innings of Virat. By the way when is Anushka’s next movie getting released ?

Me– Ask Dr. Ravi , I mean Ravi the Doctor of player’s Psychology .

Note- Above article is satirical and author has no intention to hurt sentiments of insult anyone named in article.

Dhawan Joins the elite list of ODI records, check out what was it!

3 thoughts on “How Psychological works in cricket ?”