Mumbai : The Indian Junior Girls and Cadet Girls’ teams, both finished with a flourish clinching the gold medals in the Belgium Junior and Cadet Open Table Tennis Championship, which is part of the ITTF World Junior Circuit, according to information received, here, on Sunday.

In the junior girl’s finals, India rose to challenge to quell a determined fight from the combined team of Crotia-England-USA by a close 3-2 margin and emerge champions.

There was more cheer in the Indian camp as the Cadet girls’ also finished with the top honours by pocketing the gold medal after coasting to a comfortable 3-1 victory against Hungary ‘A’ in the summit clash.

The Indian Junior girls’ team comprising of Archana Kamath, Moumita Dutta and Priyanka Pareek combined perfectly and held their nerves to overcome their opponents. Amy Wang leading the Combined Team’s challenge won both her matches against Moumita and Archana, but her teammates Denise Payet and Marta Vukelic proved no match for the Indians.

India started badly as Moumita lost to Amy 0-3 in the opening rubber, but Archana and Priyanka won the second and third rubbers to give India a 2-1 lead. Archana tamed Denise 3-0 and later Priyanka outplayed Marta by an identical 3-0 margin. In the fourth rubber Archana lost tamely to Amy 0-3 as the Combined Team leveled the scores and forced the fifth rubber. In the decider Moumita was in total control and outclassed Denise in straight games at 3-0 to clinch the issue in India’s favour.

In the Cadet Girl’s final, Diya Chitale won both her singles matches and Anusha Kutumbale won her singles tie. But the duo’s only loss was in the doubles rubber. 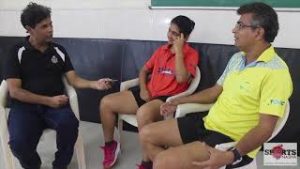