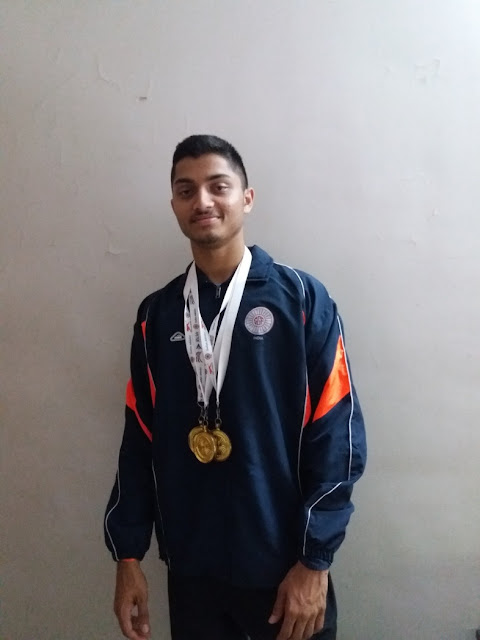 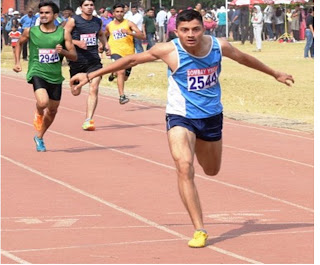 Few excerpts for our SPORTS PASSIONATE web viewers- Compiled and edited by
Aju Deshpande for Sportsnasha
ALDEN NORONHA started his  athletic career at the age of six at St. Dominic Savio High School, since then has been training under the guidance of  coach Sir Dayanand Shetty, his training has helped him to be disciplined in both sports and studies.
ALDEN started performing at the age of 10, in the 50m and 100m. But later his performance deteriorated due to an injury which affected him physically and mentally, running had become very difficult,
“I was on the verge to give up athletics ” but his parents motivated to continue. At the age of 13 he began to perform well in the interschool, district and state level meets in the 400m run and 80m hurdles and also got selected for  first national level competition which was held at Uttar Pradesh.
Thereafter winning at the local level was easy for young determined ALDEN.
Sports did not affect his studies much, instead it helped him stay more focused in studies.
At the age of 15 ALDEN started to perform at various national level meets.
He doesn’t forget his supporters, at the same time is committed.
“My school too supported especially my school principal, as he has helped me a lot to manage my studies and sports. Later at the age of 16 too I performed well, getting an admission at Sathaye College also proved me helpful as there was full support . Being a Science student, people often told me that it would be impossible to manage sports and studies, but I challenged myself to excel in both.”
Recently he was selected to represent India for the 110 m hurdles at the world school games which was held at Trabzon, Turkey.
“My parents have sacrificed a lot for me and have helped me selflessly to pursue my future. Presently science tuitions  Mindsetters Private Tutorials has also supported me a lot during this year of sports and academics. The professors have been very helpful regarding their help in studies and their appreciation for my performance in sports had motivated me to a great extent. ” ALDEN does not forget to mention parents and his encouraging tuition sir.
“It is very hectic and stressful for me to manage studies and sports but it is not impossible and the result will be very good. I aspire to represent India at the Olympics one day and make my country proud at the same time want to perform extremely well in studies too. “
ALDEN is ambitious  but will study along with tracks . His spirit is worth appreciating. Get inspired boys, follow  ALDEN NORONHA who does not want to leave study for sports and not other way round also. SPORTSNASHA wishes that not only  his name appears in list of Olympic contingent 2020, but also among the medal winners.
GLANCE AT ALDEN’s  ACHIEVEMENTS
·                     WEST ZONE NATIONAL CHAMPIONSHIPS, RAIPUR, CHATTISGARH 2014 (BOYS U/16)
·                     JIO 30THJUNIOR NATIONAL ATHLETIC CHAMPIONSHIP, VIJAYWADA, ANDHRA PRADESH BOYS (U/16)
THE BEST ATHLETE TROPHY FOR BOYS U/16
·                     DSO STATE MEET (BOYS U/16)
·                     MUMBAI SCHOOL SPORTS ASSOCIATION ATHLETICS CHAMPIONSHIPS (BOYS U/16)
BEST ATHLETE AND INDIVIDUAL CHAMPIONSHIP FOR BOYS U/16
·                     WEST ZONE NATIONAL CHAMPIONSHIPS,AJMER, RAJASTHAN, 2015, (BOYS U/18)
·                     31ST JUNIOR NATIONAL ATHLETIC CHAMPIONSHIP,RANCHI,JHARKHAND (BOYS U/18)
·                     DSO STATE MEET, NASHIK (BOYS U/18)
·                     61STNATIONAL SCHOOL GAMES 2015-16, KOZHIKODE, KERALA (BOYS U/18)
·                     13THYOUTH NATIONAL ATHLETICS CHAMPIONSHIP, KOZHIKODE, KERALA (BOYS U/18)
SELECTED FOR WORLD SCHOOL GAMES (GYMNASIADE 2016) FOR 110M HURDLES THIS WILL BE HELD AT TRABZON, TURKEY FROM 11TH – 18TH JULY 2016
·         WORLD SCHOOL GAMES GYMNASIADE 2016, TRABZON, TURKEY (BOYS U/18)