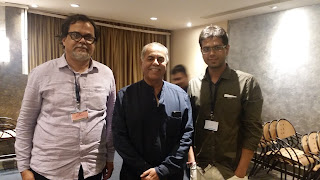 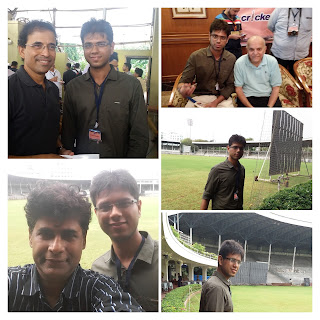 With Harsha Bhogale, and with Test Veteran Madhav Apte at CCI 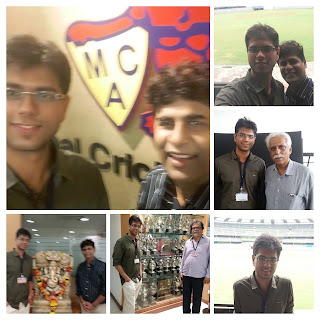 Lord Ganesha at  MCA and Ayaz Memon at Press Club 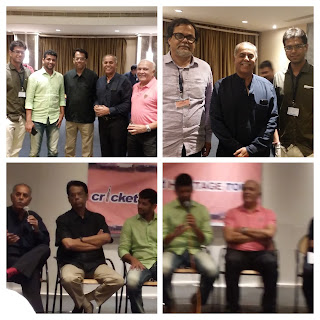 With Amol Muzumdar Milind Rege and Jayantilal and Yajurvindra Singh at MIG
Cricket Heritage Tour -Summarised – Aju Deshpande
Podar college versus Ruia college  final at Brabourne stadium,  Vengsarkar led  Podar and Sandeep Patil led   Ruia college final first day  was washed was  out in 1978 (If I am correct) .
Still, few ‘circuits’ like us waited in the stadium for hours till day was called off. That was craze of cricket we (Me,  Rajesh  and friends) had , not  just passion and  definitely not IPL like fashion.
So, It would  have been a  blunder as much as a catch dropped of Viv Richards,  had we missed the cricket heritage tour organised and managed  by cool and composed Theo ji , ever helping  Marcus ji  , energetic and unstoppable Milind Vagle ji and off-course witty  Sunny Sing  sir as well as others.
Few of the many splendid memories of the tour for you.
The tour was not just organised it must have been visualized   before organised keeping in mind the cricket lovers expectations . That was a good toss to win.
The places of visits were not the irrelevant museums and crowded  sunset points but galleries,  places, grounds where  moments were cherished and lived  by mightiest and  greats not just kings and their palaces.
As if those occasions witnessed by legends  have made their permanent  home there.
And for one more time Yajurvindra sir played few exquisite shots, as pleasant as the ones he played holding the bat for Maharashtra and India and he  put  smiles on the face of us  with some inside dressing room stories whenever he held a Mike in his hand.
Wankhede dressing room chairs looked as lively as they would look with  players sitting on them.
We broke the code of conduct by occupying them.  Luckily match refree  was not there otherwise organisors would have had to pay one person’s tour fee as fine or ban of few matches ( heritage tours) for our innocently  overenthusiatic misadventure.
The speeches from greats Madhav Apte ji and Nari Contractor ji took us to era of 60s and without any audiovisuals to support, those pioneers  showed us the roots of a big cricket tree we are seeing now.
Our perception about  ‘Brabourne’ name was nicely cleared by Madhav Apte ji who only few years back played against Sachin,  put  us in confusion as whether he is still  in thirties or seventies.
Pranab da from City of Joy and  home pitch of Sourav da  mesmerised us with his squarely turning emotional outbreak dedicated to Subhash Gupte  the magician leg spinner. Pranab  ji  didn’t allow us to move a feet and ultimately clean  bowled us with a  lovely flighted  delivery.
The artistically designed  ambience of CCI made us linger around till  the umpires asked us leave the venue and  board the bus.
Press club meeting after lunch  was  joyfull as the two graceful  media persons of repute who quickly took away the drowsiness in just few well timed  lofted shots and some of them cleared the roof of Bombay Gymkhana perhaps.
Ayaz Memon and Harsha shared the honours, they were aptly supported by ever alert Sunny Sing  at short leg who didn’t drop any.
Ultimately we arrived at MIG for exciting last session  where Milind Rege, Amol  and Jayanti Lal played few cracking cuts and drives speaking about Mumbai cricket,  talk  gave right color to  our  drink and added  a nostalgic  zing without offering any chances to fielders.
At the end of the day we felt as satisfied as one would be after seeing a classy Vishy batting and some on demand  sixes from Salim Durani with ease of Chris Gayle.
And would like to end the story with a last ball glance   –
The tour deserves more ‘likes’ than the one received by a charming girl, after updating her profile on facebook!!
============================================